Have You Heard Of The Independent E-Book Stores? 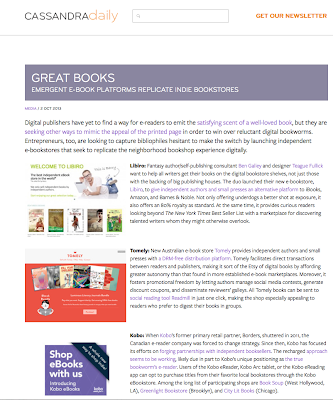 Disclaimer: The following history of book selling in physical stores is super-simplified to share my thought process.

In the "golden age" of Independent Book Stores, that's where you went to buy books.

Then Barnes & Noble and Borders kind of took over the selling of books, and then Amazon took over from them.

Independent bookstores still exist, though they're fewer in number. And they still serve an important function - curating selections is becoming more and more crucial as self-published work ups the amount of books available.

However you look at it, things have changed dramatically.

In the much newer realm of e-bookstores, We've pretty much started with the big platforms: iBooks, Amazon and Barnes & Noble.

And now it looks like indie e-bookstores are the next evolution. A recent post at Cassandra Daily highlighted these three Indie E-Bookstores:


Libiro: Fantasy author/self-publishing consultant Ben Galley and designer Teague Fullick want to help all writers get their books on the digital bookstore shelves, not just those with the backing of big publishing houses. Not only offering underdogs a better shot at exposure, Libiro also offers an 80% royalty as standard.

Tomely: New Australian e-book store Tomely provides independent authors and small presses with a DRM-free distribution platform. Tomely sees itself as sort of the Etsy of digital books, and all their titles can be sent to social reading tool Readmill in just one click, especially appealing to readers who prefer to digest their books in groups.

Kobo: When Kobo’s former primary retail partner, Borders, shuttered in 2011, the Canadian e-reader company was forced to change strategy, focusing on forging partnerships with independent booksellers. They see themselves as "the true bookworm’s e-reader." Users of the Kobo eReader, Kobo Arc tablet, or the Kobo eReading app can opt to purchase titles from their favorite local bookstores through the Kobo eBookstore. Among the long list of participating shops are Book Soup (West Hollywood, LA), Greenlight Bookstore (Brooklyn), and City Lit Books (Chicago).

It will be fascinating to see what happens in the future with indie e-bookstores and e-book sales.

This is really interesting. Thanks for the info!