The 2013 Crystal Kite Award for the New York region goes to Kate Messner for her novel "Capture The Flag" (Scholastic.) 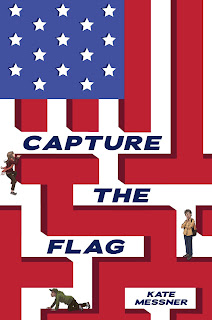 Kate has previously won the 2012 Golden Kite Award (for her picture book "Over and Under The Snow") and the 2011 Crystal Kite Award for "Sugar and Ice."

I contacted Kate to find out more about this latest accolade...

Lee:  Congratulations, and please tell us about your book.

Kate:  Thanks for the good wishes on the Crystal Kite Award – I was truly thrilled to get the news...  CAPTURE THE FLAG is the first in a three-book mystery series with Scholastic. It’s about three kids whose families are part of a secret society to protect the world’s artifacts. They’re snowed in at a Washington, D.C. airport when they realize that the giant flag that inspired “The Star Spangled Banner “ has been stolen from the Smithsonian Museum of American History and might be there at the airport with them — and with the bad guys who stole it! They have a great adventure, racing all over the snowed-in airport, down the luggage chutes, riding conveyer belts all over the underbelly of the airport, trying to track down the flag. This was such a fun book to write, and so were its two sequels.

The second book, HIDE AND SEEK, came out in April, and it follows the Silver Jaguar Society to the rainforest of Costa Rica to track down an ancient society artifact that’s gone missing.

The third book, MANHUNT, is due out in May of 2014, and this book features an international heist that sends the kids investigating underneath the streets of two amazing cities — Boston and Paris!

Lee:  How long have you been involved with SCBWI, and can you share what you feel you've gained by being a member?

Kate:  I’ve been a member of SCBWI since 2007, and while I absolutely love the craft workshops at all the conferences I’ve attended, the absolute best thing about this community is the people. SCBWI members are amazing mentors for one another — something that’s so important in this field. I’ve never met a group of people more willing to share of their time and talents to help others along on the journey.

Lee:  Do you have any advice to share with other children's book writers and illustrators?

Kate:  I think the best advice I could offer to other children’s book writers and illustrators is to focus on the joy of the work first. This business can be so tough sometimes, for both published and pre-published writers, that it’s easy to feel all muddled up and frustrated. But for me, losing myself in story is always the antidote to that. Get writing — get drawing — and play, instead of worrying so much about the editors and agents and reviewers. You’ll find the joy that made you want to do this in the first place, and your creative work will shine as a result.

I also connected with Nancy Castaldo, New York Eastern Upstate's Regional Advisor, to find out more about their region and Kate's win...

The Eastern New York SCBWI region is extremely active, with just over 300 creative members. We are located just north of New York City and stretch up the Hudson Valley all the way to the Canadian border. We offer a variety of workshops, retreats and conferences, including our ever popular annual Falling Leaves retreat held in the beautiful Adirondack Mountains. With our close proximity to publishers in New York and Boston, we are able to host a number of editors to our events each year. In addition, we have very active monthly Shoptalk meetings throughout the region. In fact, it was at one of our meetings that I got to know Kate Messner. Since then, I’ve had the privilege of presenting her with her first Crystal Kite and am looking forward to presenting her with her second. Kate has always been a strong supporter of SCBWI and, in fact, helped organize our first Shoptalk meeting in the Plattsburgh area. It is wonderful to see her rewarded for her writing.


To learn more about Kate, visit her website here.

And for more information on SCBWI New York: Eastern Upstate, check out their region's website.

Thanks to Kate and Nancy, and cheers to Kate on her Crystal Kite Award for "Capture The Flag!"