Books For Your Reading List: The 2012 National Book Award for Young People's Literature Finalists and Winner!

Let's do the Winner first!  The National Book Award For Young People's Literature Winner is... 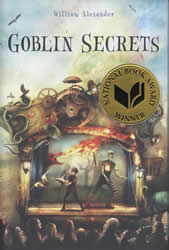 Here's what it's about:


Rownie, the youngest in Graba the witchworker's household of stray children, escapes and goes looking for his missing brother. Along the way he falls in with a troupe of theatrical goblins and learns the secret origins of masks. Now Graba's birds are hunting him in the Southside of Zombay, the Lord Mayor's guards are searching for him in Northside, and the River between them is getting angry. The city needs saving—and only the goblins know how. 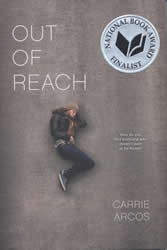 Rachel has always idolized her older brother Micah. He struggles with addiction, but she tells herself that he’s in control. And she almost believes it. Until the night that Micah doesn’t come home. Rachel’s terrified―and she can’t help but feel responsible. She should have listened when Micah tried to confide in her. And she only feels more guilt when she receives an anonymous note telling her that Micah is nearby and in danger. With nothing more to go on than hope and a slim lead, Rachel and Micah’s best friend, Tyler, begin the search. Along the way, Rachel will be forced to confront her own dark secrets, her growing attraction to Tyler… and the possibility that Micah may never come home.

Patricia McCormick, Never Fall Down (Balzer+Bray, an imprint of HarperCollinsPublishers) 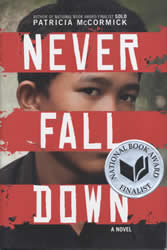 When the Khmer Rouge arrive at his hometown in Cambodia, Arn is just a kid, dancing to rock 'n' roll, hustling for spare change, and selling ice cream with his brother. But after the soldiers march the entire population into the countryside, Arn is separated from his family and assigned to a labor camp. One day, the soldiers ask if any of the kids can play an instrument. In order to survive, Arn must quickly master the strange revolutionary songs the soldiers demand. This will save his life, but it will also pull him into the very center of what we know today as the Killing Fields. And just as the country is about to be liberated, Arn is handed a gun and forced to become a soldier. He lives by the simple credo: “Over and over I tell myself one thing: never fall down.” Based on the true story of Arn Chorn-Pond, this is an achingly raw and powerful novel about a child of war who becomes a man of peace. 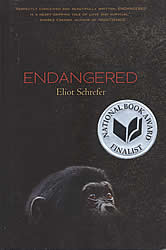 When Sophie has to visit her mother at her sanctuary for bonobos in Congo, she’s not thrilled to be there. It’s her mother’s passion, and Sophie doesn’t want to have anything to do with it. At least not until Otto, an infant bonobo, comes into her life, and for the first time she feels the bond a human can have with an animal. But peace does not last long for Sophie and Otto. When an armed revolution breaks out, the sanctuary is attacked, and the two of them must escape unprepared into the jungle. Caught in the crosshairs of a lethal conflict, they must struggle to keep safe, to eat, and to survive. 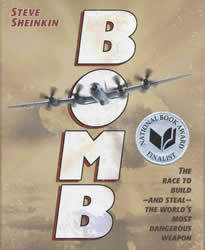 In December of 1938, a chemist in a German laboratory made a shocking discovery: When placed next to radioactive material, a Uranium atom split in two. That simple discovery launched a scientific race that spanned three continents. In Great Britain and the United States, Soviet spies worked their way into the scientific community; in Norway, a commando force slipped behind enemy lines to attack German heavy-water manufacturing; and deep in the desert, one brilliant group of scientists was hidden away at a remote site at Los Alamos. This is the story of the plotting, risk-taking, deceit, and genius that created the world's most formidable weapon. This is the story of the atomic bomb.


It's also fascinating to learn about who judged the books in this category:

Born and raised in England, Susan Cooper has been writing books for children and young adults since 1963. Her classic five-book fantasy sequence, The Dark Is Rising, won the Newbery Medal and Carnegie and Newbery Honors, and she is the 2012 recipient of the American Library Association’s Margaret Edwards Award for lifetime achievement. A board member of the National Children's Book and Literacy Alliance, she lives on an island in a saltmarsh in Massachusetts.

Daniel Ehrenhaft is a bestselling author of books for teens, among them The Wessex Papers, winner of the 2003 Edgar Award, and most recently Americapedia (2011), which The New York Times has called "Jon Stewart's America for the YA set." As an editor, he helped to create the Gossip Girl and Peaches series. He is now Editorial Director of Soho Teen, whose first list launches in January, 2013.
www.danielehrenhaft.com

Judith Ortiz Cofer is the author the YA story collection An Island Like You (1995); YA novels The Meaning of Consuelo (2003), Call Me Maria (2004), and If I Could Fly (2011); and other works. She has published poetry and prose in The Georgia Review, The Kenyon Review, The Southern Review, Glamour, and other journals and anthologies. She is the Regents and Franklin Professor of English and Creative Writing at the University of Georgia.
judithortizcofer.english.uga.edu

Gary D. Schmidt is a Professor of English at Calvin College, where he teaches courses in writing, medieval literature, and children's literature. He is the author of the Newbery Honor and Printz Honor-winning novel Lizzie Bright and the Buckminster Boy (2004), the Newbery Honor- winning The Wednesday Wars (2007), and Okay for Now, a National Book Award finalist in 2011. He lives on a two-hundred-year-old farm in Alto, Michigan.

Marly Youmans is the author of nine books, including novels, poetry collections, and several Southern fantasies for young adults. She is the recipient of the Michael Shaara Prize and was a finalist for the Southern Book Award for The Wolf Pit (2001), won the Ferrol Sams Award for A Death at the White Camellia Orphanage (2012), and received several Hoepfner Awards, among other honors. A Carolinian, she lives in Cooperstown, New York with her husband and three children.
www.thepalaceat2.blogspot.com

Congratulations to the finalists and winner!

The Pen and Ink Blogspot said...

Thanks for posting this. New fodder for first paragraph posts.
Susan at Pen and Ink

Thanks for the post, Lee. I especially liked the bios of the judges. Gary Schmidt is one of my favorites.