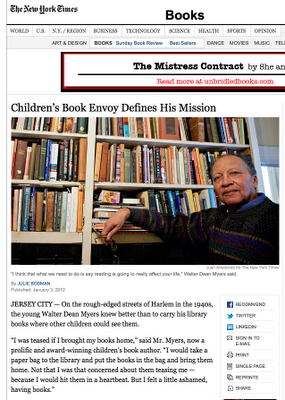 
"the choice of Mr. Myers represents a departure from his predecessors* and is likely to be seen as a bold statement. His books chronicle the lives of many urban teenagers, especially young, poor African-Americans. While his body of work includes poetry, nonfiction and the occasional cheerful picture book for children, its standout books offer themes aimed at young-adult readers: stories of teenagers in violent gangs, soldiers headed to Iraq and juvenile offenders imprisoned for their crimes. While many young-adult authors shy away from such risky subject material, Mr. Myers has used his books to confront the darkness and despair that fill so many children’s lives."

Walter (with 90 books published so far!) has won the Coretta Scott King Award, the Michael L. Printz Award, and has been a National Book Award finalist.

And I love his grasp of how vitally important books can be for kids and teens:

He will receive a medal at the Library of Congress next Tuesday. One of the first things he expects to say is that reading is not a Victorian pastime.
“People still try to sell books that way — as ‘books can take you to foreign lands,’ ” he said. “We’ve given children this idea that reading and books are a nice option, if you want that kind of thing. I hope we can get over that idea.”

Mr. Meyers is an excellent choice as National Ambassador as his own history demonstrates the difference following a passion, in his case reading and writing, can make in life.

I enjoyed the short NYT article linked here. Thank you for reinforcing the message that books are an essential part of young people's lives rather than a "nice to have". This problem transcends urban/sub/rural and income/social class as well. Thank you for your passion, Walter Dean Myers!