The Queer Joy of Numbers - A Guest Post by Lawrence Schimel

It seems lots of people have been writing about LGBTQIA+ content in kidzbooks recently, although my feeling is that so much of it is reactionary or in defense of these books, in the face of the rash of book bannings across the US and elsewhere in the world. And while it's important to fight against this homopobia, biphobia, and transphobia, I can't help feeling sometimes that *their* hate is coming to set or dominate the agenda or the public discourse. We creators don't set out to write books to be challenged or attacked, or to have to defend ourselves--even if that is often a reality.

I know that for my own board books illustrated by Elina Braslina, Early One Morning and Bedtime, Not Playtime!, our goal was to create more books featuring queer families that were not about being different or overcoming homophobia, but were just fun stories that celebrated queer joy. 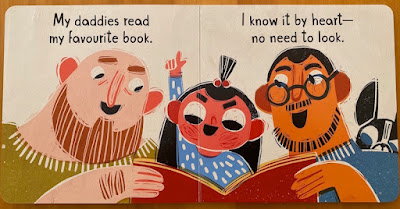 And it's been wonderful for so many kids and families to discover these books. Even if they (as well as Elina and myself, as the creators behind them, and often our translators and publishers) have also come under attack, by governments or individuals, in many parts of the world, and much of my own last year was spent learning how to weather a constant onslaught of hate and negativity.

To that end, while many alarming things are happening to books with LGBTQIA+ content (and it's important to both be aware of what's happening and know how to fight against it), I'd like to take this space of my guest blogging on the SCBWI Blog to focus instead on highlighting some of those people who've been celebrating and uplifting these books.

When I was a kid, growing up in the 70s in New York, I had access to zero books that featured any sort of LGBTIQA+ representation.

So I think it's amazing and incredible that there are now over 1,000 items in Mombian's database of books LGBTQ Family books!

(And, of course, that's not all kidzbooks with LGBTQ content, but just books for or featuring LGBTQ families.)

Mombian is a site that's the brainchild of Dana Rudolph, begun in 2005 because there was a lack of resources or information for lesbian moms (and other LGBTQ parents). Two years later, it also became a syndicated column running in regional LGBTQ newspapers in cities like Boston (Bay Windows) Chicago (Windy City Times), DC (Washington Blade), Philadelphia (PGN), etc.

The site features much more than just the database, of course, with lots of information for queer parents, news about books and other media with LGBTQ families, thematic booklists (inclusive mother's day books, bedtime books for LGBTQ families, books about pride, etc.), politics and news from a point of view of queer families, and more.

Rudolph is not an uncritical cheerleader by any means; not all representation is well-done (no matter how well meaning).

I can't help but be awed--not just by all the underlying creative work by authors, illustrators, translators, publishers, musicians, animators, etc. of the 1000+ items she has catalogued, but the constant work Rudolph has put in over close to two decades, an impressive critical body of work that doesn't often get the same kind of attention or recognition that creative work does.

So here is a shout out and a thank you to Dana Rudolph, and all she has done and continues to do to track down, write about, and generally inform the world about, all these books featuring LGBTQ families.

Someone else who has been performing an enormous task of not just breaking barriers with her own novels is author Malinda Lo, who has created not so much a database of LGBTQ content in YA but has/was for many years been doing the number crunching to chart the evolution of these themes in books, particularly paying attention to those published by commercial, mainstream publishers:
https://www.malindalo.com/blog/2020/12/9/lgbtq-ya-by-the-numbers
There is some overlap in the books focused on by Randolph and Lo, but each clearly defines the scope of their coverage, and I particularly admire how Lo goes about unpacking the language she uses, in each of her pieces and evolving over time, clearly defining her parameters and outlining her sources (and the problems or lacks sometimes inherent in these).
As someone who identifies not just as an author and translator, but primarily as a reader (and one who had no LGBTQ content in books when he was growing up), I can't help but find it encouraging to see the infographics of her number crunching over the years, and to see how more and more YA featuring LGBTQ+ characters and concerns are being published each year.
And I also admire how her analyses shine a spotlight on many of the problems and gaps within the industry and how it treats these LGBTQ+ titles or who is writing them or giving them awards (or not).
My hope is that the publishing industry pays attention to this panoramic view of what is being published--and what is missing and can be done better. And that I, as a reader, will in the hopefully-near-future be able to read those stories at last.
*   *   * 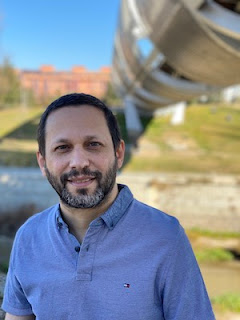 Lawrence Schimel is a bilingual (Spanish/English) author & anthologist who has published over 120 books in many different genres. He won a Crystal Kite Award for his picture book Will You Read a Book With Me?, illustrated by Thiago Lopes, and his books have also been chosen for the White Ravens and by IBBY for Outstanding Books for Children with Disabilities (three times). He is also a prolific literary translator, both into Spanish and into English, of more than 130 books. Recent translations into English include Niños: Poems for the Lost Children of Chile by María José Ferrada, illustrated by María Elena Valdez, which won the 2022 Paterson Prize for Books for Young People and was an Honorable Mention in the 2022 Américas Award, and the forthcoming middle grade memoir Piece by Piece: How I Built My Life (No Instructions Required) by David Aguilar and Ferran Aguilar, about how David, who was born missing part of his forearm, built a prosthetic for himself out of LEGO bricks when he was 9 years old. Lawrence lives in Madrid, Spain, where he founded the SCBWI Spain chapter and served as RA for the first 5 years.
Posted by Lee Wind, M.Ed. at 6:00 AM