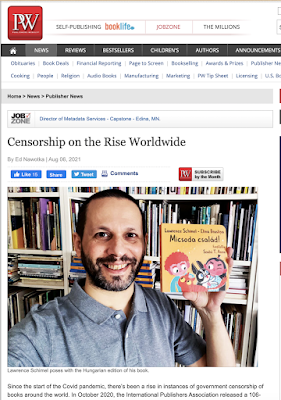 SCBWI member Lawrence Schimel – and the censorship his children's books showing families with two moms and two dads has faced in Hungary – is featured in the article Censorship on the Rise Worldwide.

Some quotes from the article:

Schimel, an American living in Madrid, has published dozens of LGBTQ-themed works for children and adults. “It’s important for all families, not just those who are LGBTQ, to see and read these books which show just how normal these families are,” he said. What a Family! is now sold in Hungary with a sticker, warning readers that it depicts families “outside the norm.” It was originally published as two books in Spanish, and Orca Book Publishers is releasing it as two books in the U.S. in September.

in July, the government of Belarus moved to dissolve the local branch of PEN after the freedom of speech organization released a report showing 621 instances of human rights violations, including arrests and imprisonments, against culture workers in the first six months of 2021.

It has long been known that the Chinese government keeps a close eye on which books are distributed there and maintains control of the issuing of ISBNs. Officially, censorship is not a state policy. Publishers have long held that if a book does not become too popular or influential in China, it will be tolerated. But unofficial policy is flexible, and recent trends have shifted toward a narrowing of what is considered acceptable.

Thanks to SCBWI member translator Avery Udagawa for sharing with me, so I can share with you.