It's a fascinating development. In their post, "Why We Need Diverse Books Is No Longer Using the Term #OwnVoices" they acknowledge that while the term started out as a way to raise the voices of under-represented creators of children's and teen literature, its use has shifted in ways that have become problematic. 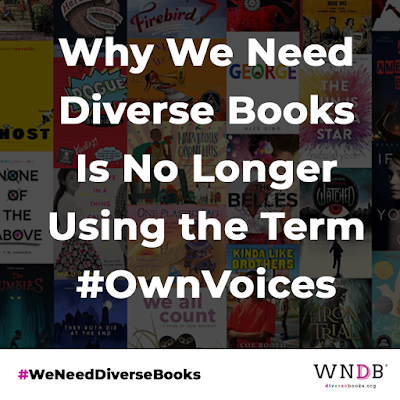 "#OwnVoices was created as a hashtag by author Corinne Duyvis in September 2015. It was originally intended as a shorthand book recommendation tool in a Twitter thread, for readers to recommend books by authors who openly shared the diverse identity of their main characters. The hashtag was never intended to be used in a broader capacity, but it has since expanded in its use to become a “catch all” marketing term by the publishing industry. Using #OwnVoices in this capacity raises issues due to the vagueness of the term, which has then been used to place diverse creators in uncomfortable and potentially unsafe situations. It is important to use the language that authors want to celebrate about themselves and their characters."

This concern over the term's evolution to, at times: a marketing gimmick; a way to police who can tell what story; a determinant of which stories get marketing/publicity attention; and forcing some creators into unsafe situations with being outed for parts of their identities (usually the LGBGTQIA2+ parts) has been growing. Author Rin Chupeco tweeted back on March 2, 2021:

"I am no longer using #ownvoices for my books and I encourage others to do the same.
Originally conceived to celebrate us, it’s now instead used by publishers as a cudgel to deny bipoc authors book deals, forcing them to come out to defend the truths in their books." 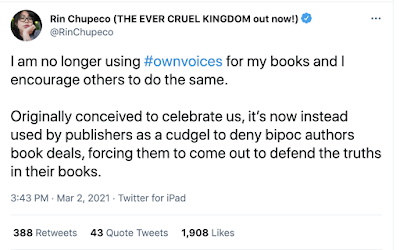 The efforts to amplify and support under-represented illustrators, translators, and writers are important - equally so is keeping up with how tools and terms are used so we help make things better.

WNDB wrote that they

"...will no longer use the term #OwnVoices to refer to children’s literature or its authors and we have removed mentions of #OwnVoices from previously published blog posts. Moving forward, WNDB will use specific descriptions that authors use for themselves and their characters whenever possible (for example, 'Korean American author,' or 'autistic protagonist')."