Translation Controversy: Who Gets To Translate Who... and What? 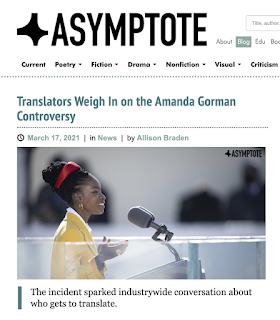 A recent article by Allison Braden in Asymptote, Translators Weigh In on the Amanda Gorman Controversy, catches you up:

On March 1, The Guardian reported that Amanda Gorman’s Dutch translator, Marieke Lucas Rijneveld, had quit. Amanda Gorman, the poet who catapulted onto the world stage after an astounding performance at U.S. President Joe Biden’s January inauguration, had approved Rijneveld, an acclaimed Dutch writer, themselves, but the announcement that Rijneveld would translate Gorman’s book The Hill We Climb provoked backlash.

Chief complaint amid the backlash was voiced by activist Janice Deul,

who called the choice “incomprehensible.” She wondered why Meulenhoff, the publisher, hadn’t chosen a translator who was more like Gorman: a “spoken-word artist, young, female and unapologetically Black.”

Haidee Kotze, a professor of translation studies at Utrecht University in the Netherlands, argues in a Medium post that Amanda Gorman’s identity was part of her message and that her translators should be part of the message, too: “It’s about the opportunity, the space for visibility created by the act of translation, and who gets to occupy that space.”

It's a parallel debate to not only who gets to write what story, but who gets published, and who gets the opportunities in our industry. It's about diversity, and equity and inclusion.

Mar 12 White translators: let's take any energy that was going to go to any further discussion of AG's translators & use it for concrete actions toward equity and inclusion for translators of color, esp. Black translators.

Illustrate, Translate, and Write On,
Lee
Posted by Lee Wind, M.Ed. at 6:00 AM

Thank you for this coverage. Translator Lawrence Schimel of SCBWI Spain is among those quoted in a thought-provoking piece about this controversy in the LA Times: