This piece was brought up in the recent #DVcon2021 panel on "Finding Your Voice" with Amy Bishop, Jemiscoe Chambers-Black, Alvina Ling, Norma Perez-Hernandez, and Angeline Rodriguez. 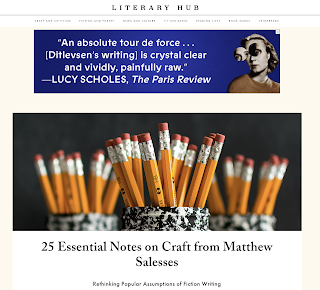 25 Essential Notes on Craft from Matthew Salesses: Rethinking Popular Assumptions of Fiction Writing compares non-western and non-dominant culture storytelling to what we've come to believe (and have been taught) is "good" writing and "good" craft. The piece covers so much - even the perils of translating from other cultures - and is both fascinating and thought-provoking.

A few points that resonated for me:

9. Expectations belong to an audience. To use craft is to engage with an audience’s bias. Like freedom, craft is always craft for someone. Whose expectations does a writer prioritize? Craft says something about who deserves their story told. Who has agency and who does not. What is worthy of action and what description. Whose bodies are on display. Who changes and who stays the same. Who controls time. Whose world it is. Who holds meaning and who gives it.

11. We have come to teach plot as a string of causation in which the protagonist’s desires move the action forward. ... In contrast, Chinese, Korean, and Japanese stories have developed from a four-act, rather than a three- or five-act structure: in Japanese it is called kishotenketsu (ki: introduction; sho: development; ten: twist; ketsu: reconciliation). Western fiction can often be boiled down to A wants B and C gets in the way of it....In East Asian fiction, the twist (ten) is not confrontation but surprise, something that reconfigures what its audience thinks the story is “about.” For example, a man puts up a flyer of a missing dog, he hands out flyers to everyone on the street, a woman appears and asks whether her dog has been found, they look for the dog together. The change in this kind of story is in the audience’s understanding or attention rather than what happens. Like African storytellers, Asian storytellers are often criticized for what basically amounts to addressing a different audience’s different expectations—Asian fiction gets labeled “undramatic” or “plotless” by Western critics.

18. There are many crafts, and one way the teaching of craft fails is to teach craft as if it is one.

Go read the whole piece. It's well worth it. I
llustrate, and Translate, and Write On,
Lee
Posted by Lee Wind, M.Ed. at 6:00 AM