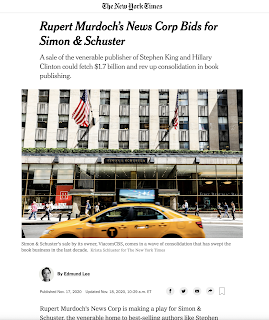 As reported this week by Edmund Lee in The New York Times, among the top bidders for Simon & Schuster are:

"News Corp, which already owns HarperCollins," and
"a leading bidder is Penguin Random House... the largest book publisher in the United States, [which] is owned by the German media giant Bertelsmann."
Additionally, "The French firm Vivendi, a minority owner of Hachette through the publisher Lagardère, has also made a bid."
It should all be settled (or not - if there's no deal) in the next few weeks. "Final bids are due before Thanksgiving, and ViacomCBS could announce a winner some time after that."
Ongoing consolidation affects the overall business - and is important to know about. You can read the full article here.
Illustrate and Write On,
Lee
Posted by Lee Wind, M.Ed. at 6:00 AM