SCBWI member Emily Balistrieri is the translator from Japanese into English of Overlord, by Kugane Maruyama, and The Refugees’ Daughter, by Takuji Ichikawa, among other titles. His translation of Kiki’s Delivery Service will be released by Delacorte Books for Young Readers in July 2020, after author Eiko Kadono won the 2018 Hans Christian Andersen Award in Writing. Emily translates books and manga for children and adults, video games, and anime subtitles from Japanese into English, and his latest children’s translation is a bilingual storybook in the “Mashin Sentai Kiramager” universe published by Kodansha in Japan.

Nanetta McGinness (NM): I’ve read that you started out as a Russian major in college. What then drew you to Japanese and how did you decide to become a translator?

Emily Balistrieri (EB): Switching focus to Japanese was very dramatic because I canceled my study abroad in Russia. I still feel sad about that sometimes. But I just realized that if I was reading manga, into anime, obsessed with Haruki Murakami (this was in 2005ish), watching Takeshi Kitano films, listening to J-pop, playing Japanese video games, etc., there seemed to be a pretty clear path in Japanese, whereas I wasn’t sure what at the time what I would do with Russian. Thinking of it that way, it’s almost embarrassing—like picking which sport to play based on which local team gets more winning headlines. But I guess you have to pick somehow.

NM: I’m in awe of those proficient in a language that uses such a different character system, let alone such a fascinatingly different culture. The wonderful Cathy Hirano, who also works in this realm, has said that “translating between Japanese and English requires “fairly strenuous cultural and mental gymnastics.”* Can you talk about your experience and what it’s like translating from Japanese to English?

EB: I know that in some languages, the nitty-gritty of how well you can preserve the exact punctuation is a thing people consider. In Japanese, it can sometimes be, “Should these sentences even be in this order?” And there are plenty of instances when a question mark in Japanese is not a question mark in English.

As far as the characters go, it’s possible for people to be very creative with them. A great example is Hideo Furukawa’s new book where he takes the kanji for “forest” 森, which is made up of three “trees” 木, and adds three more 木 at the bottom (to make the pyramid shape bigger) for the title that is “pronounced” (and searchable as) おおきな森, “big forest”: the official English translation of the title is FFFFForesTTTT). One of my favorite parts of Japanese is rubi, characters placed over other (usually more complex) characters to show how to pronounce them. It gets interesting when, instead of writing the actual pronunciation, the author might put a word borrowed from another language, an explanation, or other somehow relevant text. In The Saga of Tanya the Evil, author Carlo Zen uses rubi at one point to make a euphemistic conversation about torture explicit to the reader. So the writing system can be front and center at times, but usually it’s easier to deal with than the grammar, at least for me.

The subject-object-verb order of Japanese (“I from Japanese to English translate”) is pretty easy to get used to. It gets tougher when a rarely used phrase pops up—one that you probably studied for a test at some point, but see so infrequently in the wild that you can never remember it properly. Similarly challenging are archaic forms, which some use to create atmosphere in the same way you might find Shakespearian flourishes in English. More common, but often frustrating, are sentences that come with a ton of qualifiers before the subject; they can contain info that, at least to an English reader, seems totally off-topic in the paragraph or just feels super wordy compared to what is actually being said. On the other hand, sometimes the way writers are able to layer in details is impressive, but it can still be a challenge to replicate in English.

NM: Kiki’s Delivery Service is a beloved Miyazaki anime classic with millions of fans worldwide, and its author, Eiko Kadono, won the Hans Christian Andersen Award for Writing in 2018. So it’s very exciting that the book that inspired Miyazaki will be back in print for English-language readers. What was it like to labor in the shadow of such an iconic work and by a lauded, living author? 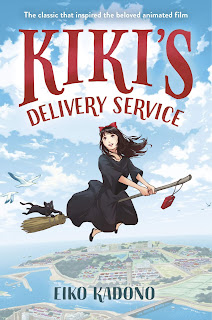 EB: Honestly, I tried to just take it one page at a time (in the turn-of-phrase sense, not literally, haha) and capture the spirit as best I could. Kirkus Reviews was kind enough to call the translation “descriptive and whimsical,” but of course that’s all Eiko Kadono’s writing; if the English readers are as charmed as Japanese readers are, then I did my job right.

NM: I think I saw that Kiki’s Delivery Service is actually part of a series. Has there been any discussion about translating and publishing more of the series into English?

EB: Yes! There are six books in the main series and then two other volumes. There hasn’t been any discussion (at least not involving me) yet, but maybe if the first book does well, we’ll be able to continue? I sure hope so because a lot happens. Imagine if only Anne of Green Gables had been translated into Japanese and none of other volumes! (Anne is an extremely popular character in Japan; there is a classic animated TV series and even a prequel series made to coincide with the hundredth anniversary of the first book's publication.)

NM: There are a number of differences between the Kiki’s Delivery Service film and the book—as generally happens when switching genres. Did you watch/rewatch the Miyazaki film when you were working on the translation? If you didn’t, it might be interesting to readers to hear why; if you did, could you talk about some of the differences between the book and the film?

EB: I deliberately avoided the movie (although I can still sing the English ending song from when I watched it as a kid), even in Japanese with no subtitles. Incidentally, I avoided the more recent live-action version, too. I didn’t want to be influenced by the way the characters were portrayed there, since this is specifically a translation of Kadono’s work.

Hayao Miyazaki kind of takes his inspiration and runs with it. Kadono has been quoted as saying that when she first saw the movie she was surprised how different it was. But she said she made sure before production started that he didn’t change the title or Kiki’s view of the world.**

NM: It’s always a fascinating process doing a retranslation.*** How did you prepare? Did you avoid looking at the first translation from 2003 so as not to be influenced, or did you read through it to know what you thought worked best? Were you able to have any contact with Lynne E. Riggs, the first translator, or with author Kadono?

EB: It was my first time translating it, so it never felt like a retranslation to me, even though that’s what it ends up as. I definitely avoided the previous translation because I wanted to come to the text completely fresh. A strange coincidence is that I have known Lynne Riggs for years because she is one of the founders of the Society of Writers, Editors, and Translators. I knew she had translated Kiki, so I never imagined that I or anyone else would be doing it. I feel almost a bit guilty, but I try to think of it as a sort of torch-passing. I definitely look up to her as a wordsmith community organizer here in the Kanto region (I’m sure she wishes I had more energy to help). She and the other members of SWET have a huge wealth of expertise and experience between them, so their events can be really inspiring.

NM: You’re listed on the title page of the book as the translator: congratulations! As a translator, I know how rare it is for an American publisher to do this. How did that come about? Once you turned in your translation to Delacorte, did you have any input on revisions?

EB: Thanks! I think “name on the interior” is how Delacorte does it. I went ahead and asked if the cover was possible, but it wasn’t this time. Never hurts to ask! The editing process was a bit irregular because the editor who brought me on was different from the one I did the bulk of the work with (Alexandra, if you’re reading this, please don’t be a stranger!), who is different from the one who finished the project. So I essentially did two rounds with them, and I know they made some other adjustments as well. Still, I’m used to just crossing my fingers after I submit a manuscript, so it was nice to be able to have so much back-and-forth for a change. I’m excited to see the final version.

NM: What are you currently working on? Any dream projects or books you’d like to translate next?

EB: Overlord and The Saga of Tanya the Evil are both ongoing series, so I’m always working on those, although they’re not for kids. I am chipping away on a masterpiece of a YA science-fiction novel about a first crush by Tetsuya Sato called Syndrome (and I’m pitching it, too, so please get in touch if this sounds good—it’s fantastic).

Other than that, here’s something to look forward to: I’m working again for Delacorte, to publish Shaw Kuzki’s Soul Lanterns. The protagonist is a 12-year-old girl living in Hiroshima 25 years after the atomic bomb, and the story is about how she and her classmates wrap their head around the horrors of the bomb and war, in general, by connecting with the adults in their community who experienced it firsthand. Kuzki is a second-generation A-bomb survivor, herself, so she’s an important voice to amplify in English. I really hope it’ll be a book that kids can read and discuss at school.

Thank you very much!

** In a Japanese-language interview she did after winning the Hans Christian Andersen Award in 2018, https://www.bookbang.jp/article/554311

*** Kiki’s Delivery Service was first translated into English by Lynne E. Riggs in 2003 for Annick Press, with illustrations by Akiko Hayashi—nearly two decades after it was published in Japan.

Award-winning opera singer Nanette McGuinness is the translator of over 50 books and graphic novels for children and adults from French, Italian, and German into English, including the well-known Geronimo Stilton Graphic Novels. Two of her latest translations, Luisa: Now and Then (Humanoids, 2018) and California Dreamin’: Cass Elliot Before the Mamas & the Papas (First Second, 2017) were chosen for YALSA’s Great Graphic Novels for Teens; Luisa: Now and Then was also named a 2019 Stonewall Honor Book and a 2020 GLLI YA Honor Book. Her most recent translations are Little Josephine: Memory in Pieces (Life Drawn, 2020), Super Sisters (Papercutz, 2020), and Undead Messiah #3 (TOKYOPOP, 2020).
Posted by Lee Wind, M.Ed. at 6:00 AM