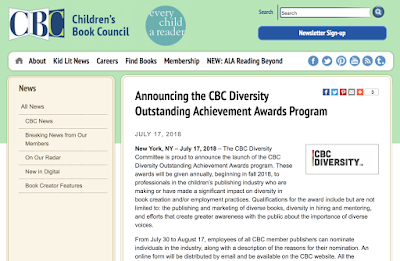 These awards will be given annually, beginning in fall 2018, to professionals in the children’s publishing industry who are making or have made a significant impact on diversity in book creation and/or employment practices. Qualifications for the award include but are not limited to: the publishing and marketing of diverse books, diversity in hiring and mentoring, and efforts that create greater awareness with the public about the importance of diverse voices.

The nominations will be crowdsourced,


From July 30 to August 17, employees of all CBC member publishers can nominate individuals in the industry, along with a description of the reasons for their nomination. An online form will be distributed by email and be available on the CBC website. All the nominations will be read by the members of the CBC Diversity Committee, who will choose three-to-five winners to be announced at the CBC Annual Meeting on September 27. The award winners will each get to select an organization of their choice to receive one thousand dollars’ worth of children’s books in their name.

Cheering the CBC on in this new initiative—here's hoping it will shine a spotlight on those already doing great diversity-enhancing things in the world of Children's Literature, and motivate everyone to do more!

And it's a nice touch that the prize (beyond the acclaim) is to have hopefully diverse books donated to an organization in the winner's name. That's a prize that walks the walk! Read all the details here.