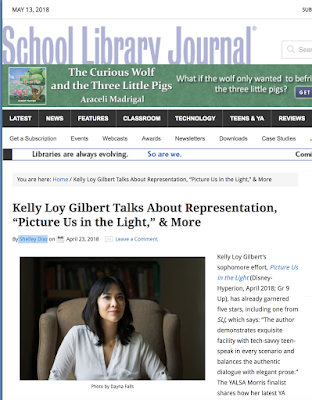 One of the great exchanges in this Shelley Diaz interview of YA author Kelly Loy Gilbert:


Shelley Diaz: Picture Us in the Light addresses multiple facets of identity: class, immigration status, nationality, ethnicity, gender, sexual orientation, languages spoken, mental health, religion. Why did you think it was so important to approach this story with an intersectional lens?

Kelly Loy Gilbert: When I was younger there was a long period when reading books about Asian American characters meant the whole story was about being Asian American, and what I really wanted, I think, was to read more stories where the characters’ race shaped and informed but didn’t define them. I wanted stories that explored the diversity within diversity, stories with characters who were as complicated and contradictory and interesting as the communities they were reflecting. And that’s always been important to me and always something I wanted to strive for whenever I got to write my book about the world I grew up in, but at the same time I don’t think I consciously set out to write this as an intersectional book as some kind of statement or issue. I think as I developed the characters their identities were intersectional as an honest reflection of who we are and the way we live. Because I don’t have “My Asian American Year,” where all I have to deal with is what race means, and then I solve that and move on to “My Mental Health Year,” and so on—we are so many things, all the time, and each of those things informs the others, and I think telling the truth in fiction reflects that reality.