September is World Kid Lit Month, a time to notice if global stories are reaching kids in the form of translations. Translator is now a member category in SCBWI, and two translator members are Helen Wang, winner of the 2017 Marsh Award and translator of 2016 Andersen Award laureate Cao Wenxuan from Chinese—and Cathy Hirano, translator of two Batchelder Award winners, and of 2014 Andersen laureate Nahoko Uehashi from Japanese.

The Andersen Award, conferred in alternate years on one writer and one illustrator, is a prestigious prize sometimes dubbed the Nobel prize for children’s literature.

It is an honor to have the translators of the two most recent Andersen winners in SCBWI. Here, Helen Wang asks Cathy Hirano about her life, career and latest publication.

Helen: Cathy, it’s a pleasure to meet you on Skype. Please tell me your life story!

Cathy: I was born and raised in Canada, and lived there until I was twenty, when I went to Japan. It wasn’t really about going to Japan; it was more about how I was going to live my life. When I was twelve, I ran into the teachings of Baha’u’llah, a 19th century Persian teacher. His words resonated with me, in particular, “The earth is but one country, and mankind its citizens.” I decided that one day, when I was grown up, I would travel the world.

Helen: What happened when you were twenty that took you to Japan?

Cathy: I realized I was grown up! Instead of going to university (I didn’t want to study at the time), I had learned carpentry. But it wasn’t a good time to be a carpenter, let alone a woman-carpenter, because there were no jobs. My Japanese-Canadian friend wrote to me from France, saying her parents were moving back to Japan, and although she looked Japanese, she didn’t feel Japanese, and was scared to go. Would I go with her?

So I went to Japan, and stayed with her parents. My plan was to stay for a year, master Japanese, then go traveling, and master the language of every country I went to! But after six months in Japan, I realized that one year would not be enough to learn Japanese. By this time, I also wanted to study what makes Japanese and Canadian people so different. We feel the same emotions, things like love, sorrow and joy, in response to similar circumstances, and yet we express them so differently. So I went to university in Japan, and studied cultural anthropology.

Helen: Then did you go straight into translation?

Cathy: Not exactly. I went back to Canada, but felt I didn’t really belong there, that I wasn’t meant to be there. So I came back to Japan, and found a job translating for a Japanese construction company. They were doing international development work, and I was there for three years, translating project reports into English. I learned on the job, and my experience as a carpenter came in useful.

Helen: And you’ve been in Japan ever since?

Cathy: I’ve been in Japan for 39 years. I don’t feel particularly Canadian, and I will never be Japanese. Mostly I feel human. When you live with two cultures, it forces you to confront and let go of many assumptions. You belong to the world not to one culture. That’s probably why I enjoy translating.

Helen: I imagine you translate from home, mostly on your own.

Cathy: Yes, while I was working for the construction company, I got married, and when our first child was on the way, we decided to move out of the big city to a smaller one (the Japanese would call it a “rural” city) in southern Japan. When we moved here, I began translating freelance while raising the kids.

Helen: How did you start translating children’s books?

Cathy: A friend who worked for a Japanese publisher asked if I’d read some Japanese children’s books and give an opinion on them. I enjoyed that so much that when she asked me if I’d try translating, I said, “Yes!” It was just as well I enjoyed it, as there wasn’t any money in it.

Learning Japanese had expanded my ability to think and perceive things in different ways. I found working on children’s books an enriching experience. And through translation, I was in a position to give children another way of seeing the world.

Helen: When I myself started translating again after a long hiatus about seven years ago, it was a revelation to discover a friendly and supportive community of literary translators. I wonder if you have the same experience?

Cathy: Actually, until a few years ago, I didn’t know of any such community, and, living out in the “country”, I hardly ever met other J-E translators, let alone anyone involved in children’s and YA lit. Then, a few years ago, Avery Udagawa and Sako Ikegami of SCBWI Japan came to visit me, and invited me to a translators’ workshop. Thanks to Avery, Sako, author Holly Thompson and others, there is now a thriving kidlit translation community in Japan—the SCBWI Japan Translation Group.

For the translators, it’s wonderful to feel part of a community, to know there are others like you, where you can ask questions of all kinds and receive practical advice about contracts and copyright, things that before I had never thought to pay attention to. SCBWI Japan has organized workshops with translators, discussing and critiquing samples, introducing useful tools and so on.

Helen: I’ve noticed how dynamic the SCBWI Japan translators are!

Cathy: It’s a very inclusive group. There is a strong desire to provide opportunities for developing skills, for sharing knowledge, and for providing much needed moral support. There is so little out there for many of us. But they also see it as a platform to increase awareness of the role and importance of kidlit translation among people of related professions, including writers, publishers and agents. If we want quality translators and quality translations, we need to raise awareness of what translators do so that they can be recognized and compensated appropriately.

In recent years, dedicated SCBWI members have also introduced Translator as a third member category, along with Writer and Illustrator, and lobbied to have content for translators included SCBWI-wide.

Helen: Your most recent book is Yours Sincerely, Giraffe by Megumi Iwasa, illustrated by Jun Takabatake. Can you tell us a bit about it?

Cathy: It’s about a giraffe who writes to a penguin, and then decides to visit him dressed up as a penguin. But he doesn’t know what a penguin looks like, and he gets it wrong. But everyone has a good laugh about it, and everything works out fine in the end. It’s a lovely, warm, humorous book. 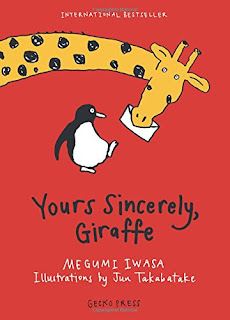 Helen: I heard there’s an interesting story behind the story?

Cathy: Yes, there is. Megumi was not a writer, but one day she dreamed that she published a book called “The Giraffe that Pretended to be a Penguin”. When she told her husband, he asked what the story was about, but she didn’t know! So she jotted her ideas down in a notebook and put it away, waiting until the time felt right.

After her two sons were born, she kept thinking of the story, but the timing still didn’t seem right. She tried drawing the story, but that didn’t work either. One day her husband bought a copy of A Picture Book of Fathers by Jun Takabatake. She loved his work. After that, whenever she thought of her story, she saw it with Jun’s illustrations!

One night, Megumi decided to read the giraffe story-so-far to her sons. By then, her youngest son was eight. “What happens next?” they asked, “tell us tomorrow.” This, she felt, was a sign that the timing was right and she completed the story.

Sometime later, she attended a storytelling event at her son’s school. And who should she meet there but the illustrator Jun Takabatake! He just happened to be visiting and had tagged along with the storyteller who was his friend. Megumi told Jun about her story. A few months later, he sent her an invitation to his solo exhibition in Tokyo, near where she lived. She went with her whole family, and Jun asked what had happened to her story. They exchanged a couple of letters, after which Jun asked if he could show the unfinished book to a publisher, and if the publisher was interested, if he could do the illustrations. And so the book came about. Megumi had never intended to be a writer, but a series of little miracles had made her one.

Helen: It’s funny how some things come into our lives, and stay with us, sometimes latent for years.

Cathy: Yes! And the story doesn’t end there! The Japanese edition was published in 2001. The publisher, Kaiseisha in Tokyo, and Yurika Yoshida at The Japan Foreign Rights Centre (JFC) worked together to promote it at book fairs. Somewhere along the way, someone also provided an English translation, but still no publishers expressed interest. One year, at the Bologna Book Fair, Yurika was yet again telling Julia Marshall at Gecko Press how humorous the book was, when Julia remarked that she had read the English, but didn’t find it that funny. Julia wondered why Yurika was so persistent in promoting the book.

Realizing that the humour was not getting through, Yurika and Julia decided to ask me what I thought. I found the Japanese very funny, in an understated way. The humour is in the situation, rather than in the storytelling. It warms the heart and makes the reader chuckle, rather than drawing out big belly laughs.

Humour, however, is one of the hardest things to translate. I decided to try my hand at it to see if I could get it across. Fortunately, it seems to have worked! Looking back over how the Japanese and English editions of this book came into being, I think that this story was meant to be, but it liked to take its own good time being born.

Helen: What is it that draws you to translating children’s books?

Cathy: There’s an innocence, a kindness, in some Japanese children’s books that I find inspiring. When I first came to Japan, it was understood that children were children; young children in particular were allowed to just be, whereas I came from a background where children were expected to behave almost like little adults.

I also think that books like Yours Sincerely, Giraffe speak to our common humanity. It isn’t being cool or sophisticated that brightens our lives—it’s things like the warm bonds of family and friendship and little acts of kindness that we do for or receive from others. Books like Giraffe also encourage us to enjoy and celebrate our differences, rather than fearing them.

I have received so much from being in Japan, and translating is a chance to give back. I hope to share through my work all the gifts I have received, to open a door for someone and let them see with a new perspective.

Helen Wang is the Marsh Award-winning translator of Bronze and Sunflower by 2016 Andersen laureate Cao Wenxuan. Wang was interviewed by fellow SCBWI member translator Nanette McGuinness earlier this year on SCBWI: The Blog.

Our thanks to Helen and Cathy for this interview, and to SCBWI's International Translator Coordinator, Avery Fischer Udagawa, for coordinating.