Innovations In Book Marketing: Bill Konigsberg's Free Short Story That Bridges His Novel and Its Sequel

I thought this was a really cool approach, so I reached out to Bill to learn more. 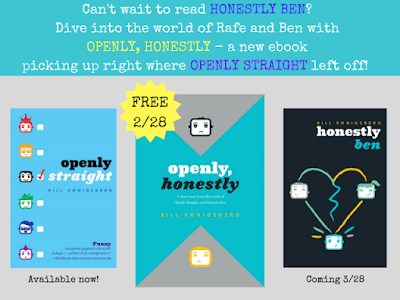 Lee: Your novel “Openly Straight” published a few years ago to a lot of acclaim. Now you have a sequel coming out March 28, “Honestly Ben.” Tell us about the short story you wrote that bridges the novels.

Bill: "Openly, Honestly" was my editor's idea, but as soon as she said it, I thought it was brilliant. The basic concept was to bridge "Openly Straight," which is told in Rafe's point of view, to "Honestly Ben," which is told from the point of view of his love interest, Ben. She gave me free reign to figure out what the story was, and I immediately knew I wanted it to be multi-perspective--alternating between Rafe and Ben. Then I had the idea that I wanted whatever Rafe was doing in Boulder, Colorado, to relate in an odd way to what Ben is doing at his home in New Hampshire over Christmas break. My first idea was that Rafe and his friend would dress a soldier statue as a goat, while, on the very same day, Ben and his brother would be dressing a pet goat on their farm as a soldier. That didn't pan out, but something that satisfied my desire to have them feel psychically connected as they pine for each other did.

Lee: Was it conceptualized as a marketing idea - something to give away for free that would spark interest in both novels?

Bill: It was, I suppose. It's been four years since "Openly Straight" came out, and while the book has lots of huge fans, there are just as many if not more people who read it and liked it but don't remember it that well anymore. And more who simply don't know the book. This was a way to get new fans acclimated to Rafe, and old fans ready to hear from Ben.

Lee: Did it go through an editing process like the books?

Bill: It did. Scholastic (my publisher) is nothing if not super-professional. I'm pleased with how it came together for sure. It's funny and there are touching moments. It was so much fun to write in Rafe's voice again. He's so funny, and in a totally different way than Ben is.

Lee: How does this differ from offering a free excerpt of a novel (which I see you’ll also be doing with “Honestly Ben”)?

Bill: It's pretty similar, I suppose. For me as an author, it's far more work intensive, but it was truly a labor of love. I truly love these characters. In fact, who knows? Maybe if this book is as successful as the first, we'll make it a trilogy!

Lee: Any lessons you’ve learned from getting word out about your books that you can share with SCBWI members and readers?

Bill: I never want to sound negative, but I will say that it's incredibly challenging to get people's attention. To do any sort of campaign that "moves the dial" in any significant way has been tricky if not impossible. The thing I've done that has worked the best is to write a book in "Openly Straight" that creates word of mouth. It's four years after its release, and it is still selling because fans are telling their friends. And I don't say this to toot my own horn; my novels "The Porcupine of Truth" and "Out of the Pocket" have failed to get this level of attention, and I think in part that's because they don't have the same kind of great elevator pitch that "Openly Straight" has. And a good, catchy title. That helps, too.

Thanks so much, Bill and congrats on the new book! 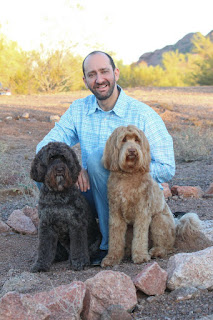 Bill Konigsberg is the award-winning author of three novels. The Porcupine of Truth won the PEN Center USA Literary Award and the Stonewall Book Award in 2016. Openly Straight won the Sid Fleischman Award for Humor in 2014, and Out of the Pocket won the Lambda Literary Award in 2009. When not writing, Bill teaches in the Your Novel Year online certificate program at the Piper Center for Creative Writing at Arizona State University. He lives in Chandler with his husband, Chuck, and their dogs, Mabel and Buford.
Posted by Lee Wind, M.Ed. at 6:00 AM