Always Learning: "People of Color" Does Not Accurately Include Native People

It came up this week, and to understand it further, a friend pointed me to Debbie Reese's indispensable "American Indians In Children's Literature" blog and the essay, Are we "People of Color?" 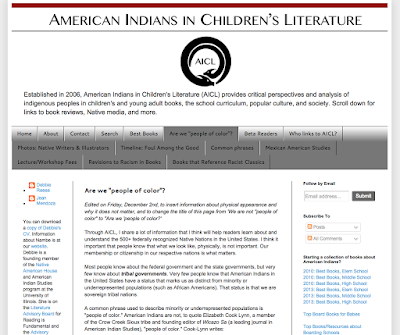 Native populations in America are not "ethnic" populations; they are not "minority" populations, neither immigrant nor tourist, nor "people of color." They are the indigenous peoples of this continent. They are landlords, with very special political and cultural status in the realm of American identity and citizenship. Since 1924, they have possessed dual citizenship, tribal and U.S., and are the only population that has not been required to deny their previous national citizenship in order to possess U.S. citizenship. They are known and documented as citizens by their tribal nations. (1)

She goes on to say that placing us within a multicultural or ethnic studies category has a negative effect because those categories obliterate our political difference. The political dimension she refers to is our status as sovereign nations, a distinction based on treaty and trust agreements made between early European nations who came to what we now call the United States, and, later agreements made between the United States and Native Nations.


The entire piece is well-worth reading.

We don't know what we don't know. But we can (and should) be open to learning, and to growing, and to listening. Particularly when we're discussing diversity and representation, listening to people share about their own identity and experience is key.

I've used "people of color" in the past, thinking that I've been including Native people within that category. Now I know better, and how to be more respectful. And I'm grateful for that.