One of the first tasks in revising my current WIP has been to nail down a firm time line for my story. When does all this stuff happen? I had it vaguely placed in the 21st century, but I didn’t want to nail it down specifically.

It’s the EveryMan problem. Some writers try to create an EveryMan, a character who can stand in for everyone and anyone. In doing so, though, they create a generic character who fails to engage the reader and becomes NoMan. To write something universal, you must do something that intuitively feels like a paradox: you must write one specific character. Only by doing this do you have a chance of letting the character live in the reader’s imagination in such a way that the character stands in for EveryMan (or EveryWoman).

I was making the same mistake with the timeline of my sff story. By refusing to set it in a specific time, I was going too generic.


Creating a TimeLine for Your SFF Story 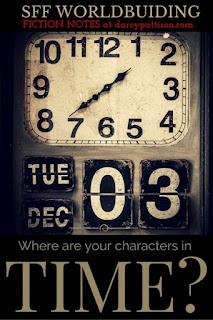 However, I also see the wisdom of waiting till I finished the first draft to nail down the time line. It will mean, perhaps, that I have more revisions to do; however, I feel that it’s a strength to have this first draft done to see how the timeline extends into so many places.

How Old are Your Characters? One of the first things I’ve done is write out everyone’s birthday. The main villain was born in 1980, and his son–the minor villain–was born in 2013. That means the father was 33 years old when his son was born. It was his first child, so why so old? It make sense within this story because the father is a scientist who buries himself in his work and generally neglects his family. He didn’t marry till after he’d done a post-doc in volcanology, and after his son is born, he travels extensively for his work. This affects the father-son relationship! The timeline forced me to think about these aspects of character.

I also knew that the main character is 14. Okay. How old are his parents? A minimum of 30, but they could be as old as 50 or so. What made sense for their relationship?

World Events. Slotting characters into a personal time line also means they exist in the world at a particular time. If someone was born in 2001, for example, was it before or after the World Trade Center bombing? The world tilted on that day and it’s important to place your character in the context of world events.

But even in a wider context, I needed to place this science fiction story in the context of astronomer’s exploration of the universe. The Kepler Space Observatory was launched in 2009 to search for planets similar enough to Earth that humans could live on them. I had to consider the timeline of their findings, and make sure my characters and the plot were aligned with that.

Imagined Events. Only once these elements were in place did I try to place my imagined story elements. Science fiction is only believable when it fits into the established world. I had to make sure that the events were believable in the context of the real history of our world. That doesn’t mean that I can’t do crazy and wild things–science fiction can and does stretch the imagination. It does mean that the events need to be based on some bits of truth that will lend it credibility.

World building for fantasy or science fiction is crucial. Rules are set up that control the story world, and once set up, the story is stronger if you stick to those rules. The timeline–in this revision of the first draft–was a crucial thing for me to nail down, and it’s adding surprising depth to the story.

My thanks to Darcy for allowing me to reprint this blog post here.

Consider that 'the specific is universal' rule applies not just to characters and timelines, but also to other elements of our stories, like setting!

And, could a timeline help you with whatever project you're currently working on, even if it's in another genre?

You can find out more about Darcy and her books at her website here.
Posted by Lee Wind, M.Ed. at 6:00 AM

So true. Time line is important for historicals as well. I get disgusted with books set in a generic 19th century. Was it before or after the Civil War? Even if the characters lived on the frontier, the war tipped their world like 9/11 tipped ours. And the age of the characters at teh time of significant events makes a difference, whether SFF or historical. Each generation is affected differently.