"There is no science to it, or even art. It's a business of hunches."


-Agent Bill Clegg, an agent whose September literary debut, "Did You Ever Have a Family," sold for seven figures in a two-book deal, as quoted in Betting Big on Literary Newcomers: The publishing industry's hunt for the next blockbuster has given rise to an elite new club: the million-dollar literary debut. 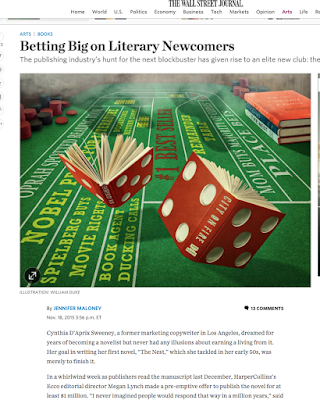 Citing nine literary debut novels that will be released between 2014 and 2016 with "advances reported at $1 million or more," what sounds like a trend in the article by Jennifer Maloney is a mix of wish-fulfillment...

"The lack of a sales track record is one of the factors that makes debut authors most appealing, publishers say, because there is no hard data to dampen expectations. "You can pin all your hopes and dreams and fantasies on a debut novel," said Eric Simonoff, an agent known for negotiating seven-figure advances.

"...if the book doesn't turn a profit, the relationship between the author and publisher can sour. And those disappointing sales figures are available for any other publisher to peruse when the author tries to sell her next novel. "That is a scarlet letter that you don't get out from under," literary agent Luke Janklow said.

And while it's good for the nine authors (and their agents) -- so long as the book is deemed a success -- it's certainly open to discussion if this is good for other book creators and the industry as a whole.

As Morgan Entrekin, publisher at the independent house Grove Atlantic put it, "It's not that they're betting on the wrong writer, it's that the bet's too big."

Read the article. As an unpublished writer, I would love to be one of those getting even $100,000, let alone a million, up front. However, from a business perspective, I really do wonder if their strategy is wise, given how few books earn back their advances and how the changing landscape is changing the way publishers operate. Do publishers use focus groups or surveys to the potential readership to test books to see which ones are likeliest to succeed?