In the Southeast division, the 2015 Crystal Kite Award goes to "Just a Drop of Water" by SCBWI Florida member Kerry Cerra. 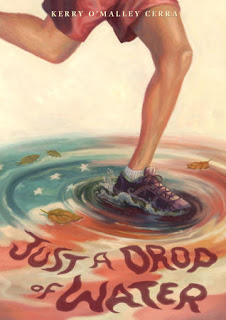 Kerry: Just a Drop of Water is a middle grade book set in Coral Springs, Florida. It tells the story of two thirteen-year-old boys—one Christian, one Muslim—and how their friendship is tested in the wake of 9/11.

That’s the short pitch of it, but it’s also a book about loyalty, family relationships, friendship, and most importantly…peace. While the terrorist attacks on Sept. 11 were tragic, I hope we can learn from them. Acceptance is the key to peace, and that begins with children. I don’t mean acceptance of terrorism, but acceptance of religious, cultural, racial, and all other differences to eventually create a world where we can live side by side. I hope that Just a Drop of Water is a step in that direction.

Lee: Can you share how the middle grade novel came about for you, premise to evolution to manuscript?

Kerry: Pretty quickly after the 9/11 attacks, it was discovered that Mohamed Atta—the lead hijacker of the plane that flew into the north tower in New York City—lived in our Florida town. Fear was already heightened throughout America, but this information almost paralyzed me. I had three small kids, and I couldn’t help but wonder if we’d seen Atta around town somewhere.

At the same time these scenarios were running though my head, I discovered that a close college friend—who is Muslim—was having a difficult time and that his parents, who lived in the Florida town where the terrorists took flight lessons, were being questioned by the FBI. I wish I could say I believed their innocence in that moment, but it would be a lie. I’ve never really forgiven myself for that. Once my head cleared and the fear subsided a little, I knew—with all that is in me—that they were innocent. I started to wonder why I had doubted them in the first place. And, I wondered if my kids, at their young ages, would have ever doubted their friends. At what age does one go from trusting and innocent, to fearful and jaded? These questions wouldn’t let up in my mind, and I may have begun subconsciously plotting this novel before I even realized it.

Having said that, I’m a pretty shy person—that kid in the back of the classroom who never raised her hand. But I hate injustice! Prior to September 11, I was never one to publicly speak out against anything. When I heard about some of the things my Muslims friends endured in the weeks following 9/11 and heard some of the stories of hate crimes being committed against Muslims and to mosques around the country, something sparked in me and I knew I had to write this story. We cannot be the same people the terrorists are. We cannot lump people together by religion, culture, race, or any other means of discrimination. I am afraid of terrorists. I have some fears about Islam because I don’t know it well. But, I do not fear my Islamic friend because I know him. We have to remember the humanness of every individual person and treat them accordingly. This novel is my way of reaching the one age group I have the most hope for regarding our country’s future. Kids. If they can learn to accept people for their differences and work together instead of against each other, then I think there’s a lot of hope for the future. Just a Drop of Water is my way of finally speaking out, publicly.

Lee: How long have you been involved with SCBWI, and can you share what you feel you’ve gained by being a member?

Kerry: I’ve been a member of SCBWI since 2006 and have loved every single minute of it—especially the conferences. I remember my first one and could hardly speak a word because I felt like I was surrounded by all these rock stars. Seriously. But our Florida chapter is filled with gracious, down-to-earth writers who cheer each other on and who pick you up off the floor when you want to quit. Maybe I would have fulfilled my dream of getting published without SCBWI, but it definitely wouldn’t have been as much fun or as rewarding.

For now, all I really know are my Florida SCBWI pals. Someday, I would love to be able to attend the New York or LA conference and mingle and be inspired by even more writers and illustrators. Goals!

Lee: Do you have any advice to share with other children’s book writers and illustrators?

Kerry: There are so many words of wisdom I’d love to share, but I think the most important thing is this. Trust yourself…in your writing, in your submission process, in selecting an agent, in considering a publishing house, in everything! Your gut will not steer you wrong. I cannot tell you how many editors and agents told me to give up on Just a Drop of Water. Some said the world wasn’t ready for a 9/11 book. Some couldn’t believe I’d written a 9/11 book that wasn’t set in New York. Some said even though they loved it, they’d never be able to sell it. But, I knew the story was important. And I wanted to tell it. I’d done my homework and was confident that there was a market and a need for a story like this. It would have been easy to stick the manuscript in a drawer—as was recommended to me so many times—and never pursue its publication, but I trusted my gut and kept at it. And look at it now. It’s won awards and made state reading lists. I’m so grateful that the book is reaching students all over and giving them a glimpse of what those days following 9/11 were like. Never give up on something you believe in. You are your book’s best advocate.

As an added bonus, I reached out to Katy Betz who designed this Crystal Kite-winning book's cover. Here's what she shared:


After reading the manuscript, I completely fell in love with the meaning behind the book title and wanted to express it visually and symbolically. My process always involves creating a mind map to extract imagery from words and piece them together. After doing several sketches, the cover composition finally emerged and it perfectly captured the essence of the story. Once the initial phase of developing the concept was completed and approved, I went on to take photo reference. I actually asked a friend to model for the running legs. We used the lawn hose to create a puddle in the street, and then I asked him to sprint (several times) until I got a great shot of tennis shoes splashing in water. The final artwork is a combination of traditional oil painting and digital painting.

I also contacted SCBWI Florida RA Linda Bernfeld to find out more about their region:

We are thrilled that Kerry won the Crystal Kite for the Southeast Region. Kerry is hardworking and organized. She wrote her book, Just a Drop of Water, while also giving SCBWI Florida big chunks of her time as Conference Critique Coordinator. Twice a year, she oversees the matching and scheduling of more than 100 manuscripts with editors, agents and writers and setting up times for the face-to-face sessions. It can be a thankless job but she and her team have been successful in creating matches that resulted in contracts for representation and book sales. SCBWI Florida hosts a regional conference in Miami in January and a five-track craft workshop each June in Disney World. We also have Boot Camps Across Florida in September as well as free meetings around the state throughout the year.


Learn more about the author, Kerry Cerra, at this website here.

You can find out more about cover artist Katy here.

And find out lots more about SCBWI Florida here.

Congratulations again to Kerry (and Katy) on "Just A Drop Of Water" winning the 2015 Crystal Kite Award!