"Feathers: Not Just For Flying" - The 2015 Crystal Kite Interview with Melissa Stewart and Sarah Brannen 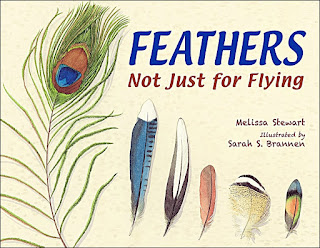 Lee: Please tell us about your Crystal-Kite winning book!

Melissa: Thanks so much for interviewing us, Lee! Sarah and I are thrilled that Feathers won a Crystal Kite Award.

"Feathers: Not Just for Flying" celebrates the amazing versatility of a simple, common natural object—the feather. We all know that birds depend on feathers to fly, but this book highlights sixteen unexpected uses, from providing protection from the sun and carrying nest materials to sliding across icy surfaces and producing a whistling love song. Making skillful use of trompe l’oiel, the vivid, realistic watercolors give readers the sense that they are viewing a lovingly compiled birder’s scrapbook.

Sarah: Feathers: Not Just For Flying is about the different ways birds use their feathers. It’s laid out like a scrapbook, with illustrations showing how the bird uses the feathers, an actual-sized feather from that bird, and other objects illustrating the similes Melissa uses to describe how each bird uses its feathers. The illustrations are trompe-l’oeil, so that even the text looks as if it were written on slips of paper taped onto the pages.

Lee: Melissa, how did “Feathers: Not Just For Flying" come about for you, premise to evolution to manuscript?

Melissa: While I was doing research for another book, I stumbled across an article in Birder’s World (now BirdWatching magazine) with a fact that blew my mind—a bird’s eyelashes are made of tiny feathers. (You can see Sarah’s drawing of these bristle feathers in the backmatter of Feathers.)

That fact made me curious. Really curious. I wondered if birds had other interesting, unusual, or unexpected ways of using their feathers, and I was dying to find out. But first I had to finish the book I was working on. So I photocopied the article and pinned it to the idea board in my office. A few months later, I was finally able to dig into the research.

As I do for all my books, I turned to four main sources for information:
• the library (for books, magazines, and newspapers)
• databases (for scientific journal articles)
• the Internet (to locate experts, in this case ornithologists)
• my own nature journals, which I’ve been keeping for about 27 years

It didn’t take long to realize that I’d struck gold. Based on my personal observations, interviews with scientists, and reports in scholarly books and scientific journals, there was plenty of information for a book.

That was the easy part of the process. The hard part was finding a truly engaging way to present the information to young readers. I needed just the right structure.

After more than three years of trial and error, I finally latched onto the idea of comparing the unusual ways birds use their feathers to objects in our everyday lives. That’s when the writing came to life, and I knew the manuscript was ready for my editor.

Lee: Sarah, please share your process on taking Melissa’s words and making them a picture book!

Sarah: Melissa and I are in the same critique group, and I had seen an early version of the manuscript long before I was asked to illustrate it. It was love at first sight in my case. I started picking up feathers for three years after I knew the book existed, just in case I got the chance to work on it!

Once I was hired as the illustrator, I realized that the book was very challenging to illustrate. For each bird, there were two separate texts, which needed to read independently. I needed to show each bird doing the thing Melissa talked about. Feathers are beautiful, so I knew I wanted to show one or more actual feathers. Plus, because Melissa compares feathers to familiar objects, I wanted to show those things too.

My first idea was to show all these things as if they were laid out in a drawer, as part of a collection. The text would appear to have been cut out of magazines, newspapers, letters, or old sketchbooks. The illustrations would seem as though they were cut out of magazines or books, or were old photographs, fine art, or sketchbook pages.

After I had done a dummy, it was decided to change the design to a scrapbook. A few things had to change but my basic idea stayed the same. For a long time, we thought we would show a child, who was collecting all these things, but in the end we dropped that idea.

The art director didn’t show Melissa any sketches until the first dummy was finished. I was very nervous about her reaction, but luckily she loved it. Illustrating this book was a dream come true and I’m still overjoyed that I had the chance to work on it.

Lee: For you both, how long have you been involved with SCBWI, and can you share what you feel you’ve gained by being a member?

Melissa: I became a member of the SCBWI in 2001. I had already published about 10 books, so what I was hoping to find was a community, a group of people who loved children’s literature as much as I did and who would support and encourage me on my journey as a writer. Did the SCBWI fill the bill? Absolutely.

I joined several SCBWI critique groups and began to volunteer in my region. In 2005 and 2006, I co-directed the New England region’s annual conference. I also served as New England’s PAL Coordinator for a few years. And I have been a member of the SCBWI Board of Advisors since 2007. Through all these experiences, I have made countless friends. One of those friends is Sarah Brannen.

A librarian introduced Sarah and me about 10 years ago. I loved her artwork and convinced the other members of my critique group to let her join. Sarah was one of the first people to really believe in the manuscript that became Feathers. It’s astonishing that she ultimately became the book’s illustrator and that now our region has selected Feathers for the Crystal Kite.

Sarah: I joined SCBWI in 2002, and attended my first conference in New England that spring. I learned so much at conferences for the first few years as I was learning to become a children’s book illustrator. SCBWI is also very helpful in connecting people to critique groups. I’m a member of a writing critique group, and the coordinator of an illustrators’ critique group, and both groups have been fantastic for sharing ideas and getting fresh opinions.

I also found the Market Surveys very helpful. Even though I have an agent, I still refer to them.

Lee: For you both again, Do you have any advice to share with other children’s book writers and illustrators?

Melissa: Join SCBWI, and volunteer in your region! No matter where you are in your writing and/or illustrating journey, the organization is an incredible resource. If you’re just starting out, the SCBWI will educate you and help you hone your craft. If you’re ready to start submitting, the SCBWI’s conferences and contests can provide invaluable access to agents, editors, and art directors. And after you’re published, the SCBWI offers a wide range of marketing and publicity opportunities. At every stage, you will meet people who become treasured friends.

Sarah: The first and best advice I share is to join SCBWI! I get asked for advice all the time, and I have plenty to give: Write or draw every day. Join a critique group. Read lots and lots of recent books in your genre. Draw the kind of art you love to do. Write about things that matter.

Thanks, Melissa and Sarah!

I also connected with Margo Lemieux, Regional Advisor of SCBWI New England, to find out more about Melissa, Sarah and their region. Pulling in the voices of other RAs, Margo shared this:

NESCBWI is an active region with a very large annual conference, programming throughout the year, and 47 open active critique groups. Even with such an active area, both Melissa and Sarah stand out as members who have stepped up to the plate a number of times. Melissa was co-director of our great regional conference in 2005 and 2006. For several years, she also did hour-long interviews at the conference with award winning authors such as Cynthia Lord. She was the inaugural NESCBWI PAL coordinator and set the tone for the professionalism that has become the guide for our events. Sarah has acted as a mentor to up-and-coming illustrators and presented art workshops at the NESCBWI annual conference. We are so proud to have both in our region.

You can find out more about Melissa at her website here.

And discover more about Sarah at her website here.

Want to know more about SCBWI New England? Check out their regional website.

One more time, congratulations, Melissa and Sarah, on "Feathers: Not Just For Flying" winning the 2015 Crystal Kite Award!
Posted by Lee Wind, M.Ed. at 6:00 AM