W. Nikola-Lisa's THE MEN WHO MADE THE YANKEES -- The Spark Award Interviews & a Chance To Win This Award-Winning Book!

W. Nikola-Lisa, who goes by Nikola, wrote and independently published THE MEN WHO MADE THE YANKEES -- and it's one of three books that won SCBWI's 2014 Spark Awards! 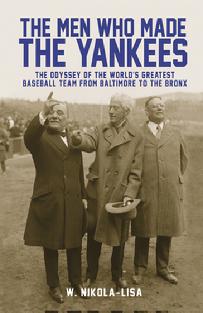 Here's our interview, and see below for a chance to win a copy...

Nikola: Yes, thank you. It is quite an honor and I'm very appreciative of it.

Lee: Please tell us about The Men Who Made the Yankees. I read that it was inspired by research on a fiction novel you were working on?

Nikola: The Men Who Made the Yankees has been a labor of love for many years. I spent most of my childhood summers at my grandmother's beach house on Staten Island and occasionally my uncle would grab a couple of tickets to Yankee Stadium and off we'd go, just the two of us. So, I grew up a Yankees' fan from the get-go.

I had been struggling with a story about the Yankees years ago when I landed upon an idea for a piece of historical fiction set in 1918 when Babe Ruth pitched for the Red Sox. I published that piece in 2011, under the title Dear Frank: Babe Ruth, the Red Sox, and the Great War, and as I worked on it I became curious as to why it took two years for the American League to place a team in the New York market. That question or curiosity was the genesis of The Men Who Made the Yankees.

Lee: The SPARK Award is to recognize excellence in children’s books published through a non-traditional publishing route. You’ve had a number of books traditionally published - Tell us about the choice and journey to publish this through your own independent publishing company, Gyroscope Books.

Nikola: A bit of luck, chance, and daring. Before the Crash of 2008 I had published 21 trade children's books over a 25 year period. And then the crash happened and everything stood still. You know how it is for mid-career authors; they're not always first in line: they often have to stand in line behind new talent, marquee authors, and celebrities.

Well, I've never been too good at standing in line, so I looked around and at the same time the market was falling, the digital publishing world was rising; So, I jumped on board. The Men Who Made the Yankees is my fifth independently published book, and the second one to win a national award.

Lee: Did doing this book outside of traditional publishing change the process of creating this nonfiction book?

Lee: Did the book have a designer and/or editor and/or other experts involved, or was it just you doing everything?

Nikola: I work with a terrific graphic artist who is trained in medieval bookmaking and calligraphy. He has quite an eye for design, and we go back and forth quite a bit hammering out our ideas. I make a physical book first. That's a must because I'm still in love with the physicality of books. I love holding them, looking at them, smelling them. A book is like a bouquet of flowers to me. In my home office, I surround myself with quite a few of them, floor-to-ceiling bookshelves surround me. In terms of editing, I do everything. Oops, that's a no-no, right? Well, I have a Ph.D. in education and spent 25 years editing over 400 graduate theses. So, I guess you could say I have the requisite skill set to write, edit, and proof-read a manuscript. The latter are actually my strong suit.

Lee: What do you see as the biggest challenge of publishing independently?

Nikola: Ideas are my thing, so I have to pick and choose what I'm going to publish with some thought. In other words, I could easily produce 3-4 books a year, because I get so excited about making them. My biggest challenge is slowing down and choosing a good, solid, meaningful project. Actually, being an independent publisher has really made me look at manuscripts in a very different way; I don't toss them into the world quite as quickly and thoughtlessly.

Lee: That's fascinating. What’s been the best thing about publishing this way?

Nikola: It enables me to live in a unique parallel universe. It may seem weird, but publishing independently allows me to live outside of the traditional publishing world and in my own fantasy world, which has always been a gratifying place to be. I'm not in it for the money, don't have to be at this point in my life; I'm in it because I love making books. I consider myself a "book artisan" the way other people consider themselves potters, musicians, painters, or what have you. I live in Chicago and hand sell many of my books at street fairs and odd book events, and usually I show up on my bicycle with my bike trailer laden with a few suitcases filled with books. I could have easily been a magician; it just happens I make books.

Lee: How long have you been involved with SCBWI, and has that helped you on your professional journey?

Nikola: I've been a member of the SCBWI since the early 1980s. In my early days I thought I would illustrate as well. I even entered the Don Freeman Award and was a runner-up for an early manuscript that I illustrated. The SCBWI has been a good, long-term friend of mine, and I'm glad to see that they are beginning to open the doors a bit--still more to go, I'm afraid--to independently published authors.

Oh, and my claim to fame with the SCBWI. I have a few, but here's my favorite. Once I was at a local SCBWI chapter meeting that was organizing a children's literature event and they needed a driver for Tomie dePaola, who was the keynote speaker. No hand went up, except for mine, which went up like a bolt of lightning, and I spent one of the best weekends of my life driving Tomie around.

Nikola: I once had an astrological chart reading. It was mesmerizing. I mean the guy (he was a computer programmer at a local university) nailed it on every level. When it came to writing, he said that I had all of the writer's destiny marks except one--contact with publishers! I mean, talk about the kiss of death. In many ways, however, it's been true. I've never kept a long-term relationship with an editor or with a publishing house. Then I published my first book independently. Bingo! The light went on. Hey, if I become my own editor/publisher, then I don't have to worry about that writer's destiny mark anymore. And that's what it feels like right now.

Finally, for those of you who'd like know more about my independently published books, please visit my website at gyroscopebooks.com

Thanks so much, Nikola!

Leave a comment below for your chance to win a copy of THE MEN WHO MADE THE YANKEES. We'll randomly choose our winner in one week.

Loved reading the story behind the book, and I would love to read the whole book! We're baseball-crazy in this house.

Hi Stasia,
Congratulations on winning a copy! Please contact me at leewind (at) roadrunner (dot) com with your mailing address.
Thanks,
Lee