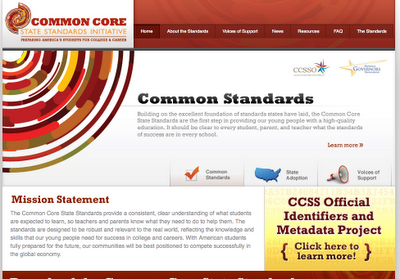 The Common Core State Standards in English (already adopted in 46 states and Washington, D.C.) call for public schools to "ramp up nonfiction so that by 12th grade students will be reading mostly “informational text” instead of fictional literature."

"New education standards elbow out literature: Is non-fiction more rigorous than literature? An important education initiative thinks so" in Salon by Alex Halperin

Jamie Highfill is mourning the six weeks’ worth of poetry she removed from her eighth-grade English class at Woodland Junior High School in Fayetteville, Ark. She also dropped some short stories and a favorite unit on the legends of King Arthur to make room for essays by Malcolm Gladwell and a chapter from “The Tipping Point,” Gladwell’s book about social behavior.

“I’m struggling with this, and my students are struggling,” said Highfill, who was named 2011 middle school teacher of the year in her state. “With informational text, there isn’t that human connection that you get with literature. And the kids are shutting down. They’re getting bored. I’m seeing more behavior problems in my classroom than I’ve ever seen.”

And from the Salon article:

"...the standards appear to suggest that non-fiction is by definition more rigorous and practical than fiction and poetry. But is “The Tipping Point” a tougher slog than “Moby Dick” or more thought provoking than an average “literary” novel?"

The standard architects are saying that the teachers of other subjects can assign non-fiction that relates to their subject (i.e., math students could read Euclid’s “Elements”) which would free up English teachers to still teach fiction, but, as it says in the Washington Post article,


In practice, the burden of teaching the nonfiction texts is falling to English teachers, said Mark Bauerlein, an English professor at Emory University: “You have chemistry teachers, history teachers saying, ‘We’re not going to teach reading and writing, we have to teach our subject matter. That’s what you English teachers do.’ ”


What's your take?  Is fiction being undervalued?  Or is Non-Fiction finally getting its due?

I don't think kids will ever stop reading fiction, they will just read it on their own, but perhaps miss some really valuable books in so doing. As for nonfiction, well, it should be read more but more writers are pretty dry about it and there is a need to make it more accessible.

It's a tough call. As a National Writing Project participant our focus is writing and not just essays but sacred writing. Children need literature just like they need the nursery rhymes and Dr. Suess. Some books are like rites of passage. We must demand the same jewels for our future that we hold so dear.

I have to say with the illiteracy rate where it is, to require teachers to eliminate fiction with an actual goal being for students to be reading mostly informational texts is counter intuitive. Those who are prone to enjoy reading will naturally read both fictional as well as informational texts but for those who do not enjoy reading whether due to learning disability, short attention span, or lack of interest will shut down if school based reading becomes non-fiction, informative texts. I believe strongly in a healthy balance of the two as students need to learn to read both texts that interest them as well as those that don’t in order to be successful but just as an adult at a job that provides no satisfaction or enjoyment might quit, students will be likely to quit on reading.