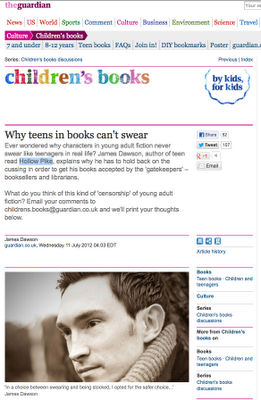 A debate in the UK on the merits of introducing an age-guidance rating system for Young Adult books inspired this article, WHY TEENS IN BOOKS CAN'T SWEAR, by YA author James Dawson.

James goes into detail on the level of swearing he and his editor agreed on for his debut novel Hollow Pike, and discusses role of gatekeepers (librarians, booksellers, and parents who pay for the books) and their feelings about swearing (and being seen encouraging it.)

This dilemma comes back to the author. No one tells us what we can and cannot write, but so early in my career I didn't take the risk of being refused entry at the gate. In a choice between swearing and being stocked, I opted for the safer choice. It is up to you to decide whether I run the risk of losing artistic integrity by removing sex and swearing.

He also weighs in on role youth play in deciding what's right for themselves as readers.

As a 12-year-old, I had no access to young adult fiction because it didn't exist. Instead I went straight to Stephen King and James Herbert. I was able to choose what was suitable and unsuitable. The rise of young adult means we are able to explore "the darkness" with the safety wheels on.

Ultimately, James is against a rating system.


What's your take?  Do you think a rating system for teen books is a good idea?

And how about in your writing?  How far a swear word is too far for you?

I wrote a long comment, but deleted it. This is a very controversial topic, but one that should be further explored.

I think a ratings system for YA books is a horrible idea. I have been a children's/teen bookseller for 17 years and a parent for longer and I think that, ultimately, a rating system will take the place of the job that parents should be doing. If a parent cares what their teen is reading, then they should be involved in the book selection process by pre-reading (YA books are so amazingly worth reading these days) or consulting one of the many websites devoted to rating and reviewing books. As a bookseller, I meet plenty of parents who do this. And, as James Dawson so brilliantly pointed out, when he was a teen (and when I was a teen) there were no YA books and we went right to the adult section. We (girls) all read "Go Ask Alice," "Flowers in the Attic," "Forever" and "Flying Lessons" whether our parents wanted us to or not, or even knew about it, for that matter. And that's really the bottom line - kids are going to read what they want, especially in this digital age. Let's not deface book covers with ratings by a dubious at best panel of "experts."

I think, like movies or video games, it should be rated. Just like the job parents should be doing, a rating system is an additional reminder of the content in which you'll be exposed to. Obviously parents can judge a movie by watching it first, or they can read reviews, or see it's rating. Same with a novel. Knowledge of a substance, whether it be food, movies, media, or books, is always nice to have.

I'm anti rating system. These metrics always boil the media down to their components without context -- and context is everything.

Think about it: full-frontal male nudity gets a movie an R rating, but would you really rate In the Night Kitchen R? Okay, obviously not a teen book, and I'm going to extremes. But you get the idea.

My impression is that people who support rating systems and/or other regulation of YA lit are (a) unnecessarily protective of teens and (b) unwilling to do their "homework." Slapping a warning label on a book is easy, but is it really that much harder to look up some book reviews if you're concerned about age-appropriateness?

Professional reviews of children's and YA books consider all content within context before making a suggestion of age/grade range. You don't have to subscribe to any professional journal to access this information, either. Just go to Barnes & Noble's or Amazon's websites. Or ask your librarian, for crying out loud.

Finally, speaking as a YA author, my agent and editor never asked me to tone down language. I didn't really push it -- it didn't seem necessary -- but there's enough in there to evoke reality (the "worst" being the F-word). But I didn't encounter any of the push-back Dawson describes. I wonder if his book has a younger audience than mine, or if there are differences between the UK and the US, or what. I don't think there's a hard and fast rule, though, especially given how many US-published YA books that are rife with the F-word.

This is just brilliant:

"The rise of young adult means we are able to explore "the darkness" with the safety wheels on."

I went straight to Stephen King's stories as well, and many other places I probably shouldn't have gone as early as I did when I was looking for . . . well, for everything.

It probably would have been a lot healthier for me if the darkness had been inhabited by other teens, rather than adults would were pushing edges I hadn't even discovered yet.

Movies are rated, CDs/MP3s are marked as well. Should books be?
Maybe it doesn't really matter so much, it won't change who reads the books, I don't think. It would simply give more info about the book to the protective parent, or the child who just isn't interested in 'dark matter'.

The beauty is this: whether books are tagged with a rating system or not,
YA authors whose characters have sex or swear, or who explore new terrain or sharp edges can show teens that they're not alone in the darkness.

Whether the reader is at the point where they are ready to have sex or not, whether they need the power of certain expressive words in their vocabulary or not, through some of the best YA they can read about teens who are exploring these things. Then they can make their own choices. They're going to anyway.

So I guess I'm for a rating system that informs, but doesn't prohibit, if that makes sense. And it would help if the author was involved.

Thanks for the great post, and the opportunity to 'write out loud' about an issue that's been on my mind :)