I'm thrilled to host day two of Deborah Halverson's blog tour for WRITING YOUNG ADULT FICTION FOR DUMMIES. Deborah is also the author of YA novels HONK IT YOU HATE ME and BIG MOUTH. She was as an editor at Harcourt for a decade before leaving to write full-time and now maintains DearEditor.com, an advice website for writers, and works as a freelance editor. For more about Deborah, visit her website or follow her on Twitter. 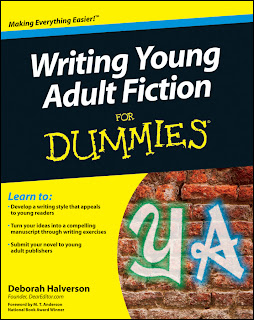 SERVING UP SUBTEXT, by Deborah Halverson

Alright, you’ve done your due diligence and shown your manuscript to your critique group, your trusted colleague, or your hired editorial gun for feedback on its strengths and weakness. You sincerely want to hear what they say, good or bad, because you’re committed to doing whatever is necessary to make your story great. You’ve put on your thickest skin, you’ve picked up your favorite pen, you’re waiting for the feedback, totally ready to revise . . . and then somebody goes and calls your manuscript “flat.”

What in the world does “flat” mean?

And how in the world do you go about, er, unflattening it?

A “flat” manuscript has characters who say and do things in a wholly expected, straightforward manner. They don’t surprise readers, they don’t keep readers guessing about their sincerity or their plans or their motives. And their behavior and actions are equally straightforward, supporting exactly what the character just said. What you see is what you get with these folks, and a manuscript filled with characters saying and doing what seems like the logical thing to do without doing it in a way that intrigues anybody lacks subtly, richness, pizazz. It feels “flat.”

A great solution for “flat” is subtext. Subtext refers to what’s going on behind the spoken words. When your narrative beat (the bit of exposition that separates two snippets of dialogue) offers action that directly undermines or contradicts what’s being said in the dialogue, the reality behind the words is the subtext. For example,


“So that’s it, then,” Trish said. “I’ll run for class president, and you’ll be my campaign manager. That’s our play.”

“I knew you’d love it!” Beth flipped open her notebook and started writing wildly. “We’ll get posters made, and buttons. Gotta have buttons. Oh, and stickers. People love stickers. I’m telling you, you’ll be on that student council with Tom in no time.” She ripped a blank page out of her notebook and gave it to Trish along with a pen, and then went back to her list. “Campaign speech, slogan, t-shirts…. I’m so glad I came up with this! It’ll be a lot of work, but if we stay focused we’ll pull it off.”

“Oh, we’re focused,” Trish said, rubbing the side of her pencil lead on the paper to pick up the texture of the bumpy tile table beneath it. “We’re totally focused.”

The subtext here is their relationship and Trish’s letting Beth be the workhorse while she herself gets the glory. Her random doodling demonstrates her lack of commitment to the work despite her verbal pledge that she’s up to it. At this point, readers can guess at Trish’s motives: She may be oblivious to the mismatch of her words and actions, or she may not be willing to face the truth behind that mismatch (it does make her a rotten friend, after all), or perhaps she’s deliberately encouraging Beth’s misperception of their relationship because it works in her favor. Regardless of Trish’s awareness or motives, she is implying one thing with her words and implying something else entirely through her actions, and readers will pick up on that.

Creating a subtext is a rich and deliciously teasing way to tell a story. It puts readers “in the know” while leaving characters clueless. And I ask you, What young person doesn’t love knowing more than everyone else? Subtext is a great way to give your young adult fiction depth. When kids clue in to those contradictions, they start

When you can get a young reader to interact with your story, you’ve hooked her. Score!

Here are three ways to create subtext in your story:

See the Trish and Beth example above.

2.    Contradict a character’s perception of a setting with the realities of that setting

Consider two teens cruising down the highway in peppy electric car on a road trip to the national high school band competition:


“Wait, what did that sign say?
“Compton, next exit.”
“I’ve heard of Compton.” Kelly turned on her blinker and started to change lanes. “So it must be a big town. There’s bound to be a Starbucks. Let’s turn off here and get a latte. I totally need a caffeine hit.”

Kelly’s ignorance of Compton’s notoriety conflicts with the reality of that city’s ranking by the FBI as the 8th most dangerous city in the United States. Readers will know why Compton’s name strikes a bell thanks to popular music, news, and the story description on the back of the book. Peppy, preppy Kelly, on the other hand, has no idea.

This exchange seems to be about a boy driving his car too fast to show off for his girlfriend. But when we know that in other scenes he’s tried to push the girlfriend into having sex with him, there’s rich subtext:

Contradictions throw motives into question, inject undertones of secretiveness and deceit or fear and hesitation, help flaw main characters, expose relationship histories, and lay the groundwork for rewarding revelations. The end result is a young adult story with more depth—both emotional and intellectual—and a plot with more complexity.

Wow, there is a Dummies book for everything! :) I liked the pointers here, very practical and helpful. Thank you!

Great advice! I can't wait to buy this book!

Sure seems like there is, Stephsco! I loved discovering how hands off the Dummies editors were in terms of letting me put together the book I believed writers needs/want. I sure worked hard to make sure it has useful info and techniques for writers of all levels. It was such fun to write and I hope that carries through, too. Thanks for your kind words!

These examples are fantastic for showing our subtext can be used. I understand it a little better now and am excited about using in a scene that I couldn't quite figure out what was needed.

I am glad I found this post! I have always understood subtext in theory, but have had difficulty putting it into practice in my own work.

I got a manuscript back from an editor at a pub house who said she liked it but the main character was too "sincere." I didn't understand what that meant, but now I do, thanks to this post.


I'll be checking out your book, too!

"Too sincere." I can see how that feedback would be tough to get a handle on. Definitely give this a try and see what it does for the character's sincerity. Good luck!

I love contradictions and hidden meanings in dialog and in a narrative in general. Your advice is great! Thanks very much, Deb. :-)

Great post, Deborah! I love all the examples they are so real. :)

Great post with great examples that really show subtext. Thanks!