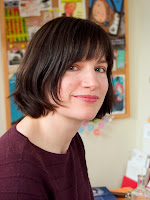 Since 1968, the Association of Jewish Libraries has annually presented the Sydney Taylor Book Award to outstanding books for children and teens that authentically portray the Jewish experience. The award, which encourages the publication and widespread use of quality Judaic literature--offers Gold Medals in three categories: Younger Readers, Older Readers, and Teen Readers. Honor Books are awarded silver medals, and Notable Books are named in each category.
This year Howard Schwartz and Kristina Swarner, won the Sydney Taylor Book Award in the Younger Readers category for their picture book GATHERING SPARKS (Roaring Brook), and I'm thrilled to feature an interview with Kristina, an SCBWI member, who is here on a stop in the 2011 STBA blog tour.

Kristina's work is often described as magical and dreamlike. She draws imagery and inspiration from memories of exploring old houses, woods, and gardens when she was a child. The RISD graduate has illustrated numerous books as well as greeting cards, calendars, magazines, wine labels, and theatre posters. Her previous awards include the Koret International Book Award in 2006 and the Sydney Taylor Book Award Gold Medal in 2008. To see more of Kristina's work, visit her website.

Here's a link to the 2011 Sydney Taylor Book Award blog tour. Be sure to check out interviews with all the winners!

You recently won a Sydney Taylor book award for your picture book GATHERING SPARKS. Would you tell me and my readers a little about this book and what drew you to the project?
I'm quoting Howard Schwartz here: GATHERING SPARKS was inspired by the essential Jewish teaching of tikkun olam, repairing the world. This was the primary teaching of Rabbi Isaac Luria, known as the Ari, who lived in Safed in the 16th century. In linking the stars with good deeds, I was drawing upon an interpretation of the Ari’s myth of the Shattering of the Vessels and the Gathering of the Sparks. This interpretation proposed that when the vessels filled with primordial light shattered, as takes place in the Ari’s myth, not only did they scatter holy sparks everywhere, but they also created the stars. According to the Ari, by following the mitzvot, the commandments, or by doing a mitzvah, a good deed, these holy sparks will be gathered, and the world will be repaired.
I was attracted to the project because I love working with Howard--he has an endless wealth of stories--and because the story is both beautiful and has a universal resonance. The theme of caring for and repairing the world is very important to me.

What does winning this award mean to you? How did you feel when you learned you'd won?


I'm in such good company, past and present, that the award truly is an honor. I won the award (for THE BEDTIME SH'MA) in 2008 and was delighted, but when I found out that I'd won it again this year I woke my kids up by jumping up and down and yelling.


Your style is so soft and beautiful--it has an ethereal quality. Will you tell us about your technique?


I begin with a black and white linoleum print that helps me get the positive and negative shapes and the underlying texture. Then I go over it with watercolor and colored pencil. I try to leave the white of the paper where I can, so things like stars really glow.


As an illustrator, what advice can you offer others who aspire to illustrate picture books?
Do you have upcoming projects you could tell us about?


I'm working on a few books which I can't say too much about yet, but I've also been having fun working on a bunch of theatre posters lately, which is appropriate, because I sometimes think of the pages I'm illustrating as little stages.
Posted by SCBWI at 10:55 AM

That flying horse image is so beautiful.

Isn't it? There are lots of great ones on Kristina's website. I hope you check it out.

Thank you Alice and Kristina! Kristina's work is so lovely. Thanks for the terrific tips for aspiring illustrators, too.

I love to hear how an illustrator works, so I was intrigued by the concept of black and white linoleum. Kristina, congratulations on your double achievement and thanks to both you and Alice for this great interview!

I really want to buy this to read to my grandchildren.

Oh, I agree "dreamlike" and what a wonderful image to think of each pb illustration as a "little stage"

Oh, I will look at this for sure. Right after I celebrate. Here's lifting a a glass of virtual champagne to you and the CYBILS judges. THANK YOU.