This week's Crystal Kite Spotlight shines on CHICKOSAURUS REX by the husband and wife team of Lenore Appelhans and Daniel Jennewein.

From SCBWI Germany/Austria, their book won for the "International Other" Division. 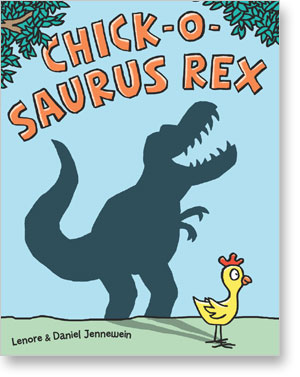 I contacted Lenore and Daniel to learn more...

Lenore and Daniel: CHICK-O-SAURUS REX is about a little Little Chick, who is bullied by the bigger animals. He feels small until he discovers he’s the closest living relative to the mighty T-Rex. When a wolf threatens the farm, Little Chick finds his inner T-Rex and saves the day.

Lee: unexpected heroes saving the day - hurray! How long have you been involved with SCBWI, and can you share what you feel you've gained by being a member?

Lenore and Daniel: We joined in 2007 after working on a picture book for about two years and thinking it was ready to submit. We soon learned it was not! At the 2008 pre-Bologna conference, Daniel got great feedback on his illustrations from the art directors on the First Look panel, which led to a two-book contract with HarperCollins for his debut with Author Audrey Vernick: IS YOUR BUFFALO READY FOR KINDERGARTEN? We also met our eventual (and current) agent Stephen Barbara.

Lenore and Daniel: Keep your eyes and ears and imagination open. You never know where you’ll find ideas and inspiration. With CHICK, we were visiting friends and their daughter told Daniel that she had learned something cool that day in school. She asked if he could guess the closest living relative to the T-Rex, and he was surprised by the answer. When he told me, I thought it would make the perfect picture book.

And it clearly did!

Thanks, Lenore and Daniel, and cheers to you both for CHICKOSAURUS REX winning the 2014 Crystal Kite Award!

You can also get details on SCBWI Germany/Austria at their regional website here.