The 2013 Crystal Kite for the Americas Division goes to Jennifer Lanthier for her picture book "The Stamp Collector (Fitzhenry and Whiteside.) 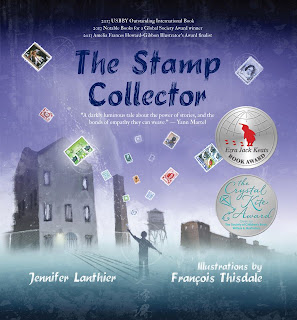 I contacted Jennifer to find out more about her winning book and her involvement with SCBWI...

Lee:  Please tell us about your book.

Jennifer:  The Stamp Collector is a story about the power of stories, and the importance of shining a light where there is darkness. It is a picture book about a boy who collects stories and a boy who collects stamps. They meet as teens when the stamp collector leaves school to take a job as a prison guard and the storyteller is sent to prison for writing a short story.

It’s an unusual subject for a picture book but the inspiration came from a very real encounter I had with the exiled writer Jiang Weiping at the offices of PEN Canada in 2009. He had just been released from a Chinese prison where he was sent for a series of investigative articles describing the activities of Bo Xilai, then a very powerful government official. Weiping told us that, in a Chinese prison, the guards are given no information about prisoners or their crimes; the prisoners might be thieves or murderers or poets. He told us that we should write to the imprisoned writers but we should know that the letters would never make it to them – only the guards would see them. Then why write? Weiping replied: because the guards collect stamps. The idea that stamps from other countries could tell a story without words was powerful. Weiping speculated that some guards might be moved to treat their prisoners less harshly if they knew the world was watching, or knew that the “crime” they had committed was one of human rights activism or simply writing.

I left that meeting and went home and wrote The Stamp Collector. I was very fortunate to find an editor, Christie Harkin, and a publisher, Fitzenhry & Whiteside, willing to take a chance on such a commercially doomed book. A book set in another land, mostly inside a prison, where one of the two main characters dies? A picture book? But they found the wonderful artist Francois Thisdale and his illustrations transformed it from a story I thought no-one would publish, to a book that, incredibly, won the Crystal Kite!

As well, the United States Board on Books for Young People has named it an Outstanding International Book and the International Reading Association named it a Notable Book for a Global Society. It was a finalist for the LIBRIS awards of the Canadian Booksellers Association and for the Amelia Frances Howard-Gibbon Illustrator’s Award of the Canadian Library Association. I also received an Ezra Jack Keats Emerging Writer Honour Award for The Stamp Collector in April and in June I received the Huguenot Society Award from the Ontario Historical Society, given to the book published in Ontario during the past three years that has made the most significant contribution to the discussion of freedom of conscience. A French translation of The Stamp Collector is now underway.

Lee:  Wow - congratulations on all the accolades!  Can you share with us how long you've been involved with SCBWI, and what you feel you've gained by being a member?

Jennifer:  I think I joined SCBWI for the first time in 2007, when HarperCollins Canada published my first middle grade novel, The Mystery of the Martello Tower, but it might have been in 2008, when they published the sequel, The Legend of the Lost Jewels. I was tremendously excited and honoured and delighted to become a member. I loved reading about other members and found the articles inspiring. Unfortunately, the books did not do well and, over time, I became profoundly discouraged about my abilities as a writer. I stopped writing and eventually I let my professional memberships, including SCBWI, lapse. I told myself I couldn’t justify the expense but the truth is I felt like a fraud. I didn’t have a work-in-progress, I had gone back to work and shuttered my home office and I felt I didn’t deserve to call myself a writer. There were other things going on in my life then – nothing worse than the usual struggles or losses everybody deals with over the course of their lives – but losing writing was tough.

One of the reasons I was at PEN Canada that day and met Jiang Weiping was because I had read that volunteering helps stave off or alleviate depression and I had realized I needed to do everything I could on that front. Even when The Stamp Collector was accepted for publication, I still felt hesitant about re-entering this world. I’d gone from writing two novels that were commercial failures to writing an even more certainly doomed picture book. But The Stamp Collector was about me re-affirming my faith in the power of stories and in the very act of writing itself. I had to stand behind it. So I renewed my membership in a number of professional organizations: SCBWI, the Author’s Guild of America, the Writer’s Union of Canada, the Canadian Society of Children’s Authors, Illustrators and Publishers. I’m so glad I did.

I thought the email informing me I’d won the Crystal Kite was spam. The part of the subject heading that displayed when I opened my email that night was “Congratulations, You’ve Won” and I nearly pressed delete before deciding just this once to be reckless – although I reminded myself not to click on any links inside the email! (This makes more sense if you know that I did once receive an email sent in error by a publisher offering a three-book deal for a princely sum to someone who was not of course me. To someone who was in fact not even a children’s author. A humbling experience.)

I was pretty stunned to read the contents. I passed my laptop to my husband and asked him to read it, just to be sure. I truly don’t have the words to express what this means to me. This is a book that almost nobody reviewed – not Kirkus, not Publisher’s Weekly, not the major dailies – so I’ve been really grateful to the book bloggers and the occasional, kind librarian who has gone out of her way to email me. But the Crystal Kite means SCBWI members, people whose work I deeply admire, took the time to read The Stamp Collector and cast a vote and that’s just… staggering.

Lee:  Thank you for sharing that.  Do you have any advice for other children's book writers and illustrators?

Jennifer:  I think for the most part writers and illustrators would be wise not to do what I’ve done – in the sense that not writing, not creating is not a good answer. But I can’t just glibly say “don’t get discouraged” because this is an incredibly discouraging industry. And I haven’t met many writers or illustrators who do not battle demons of self-doubt on a daily basis. I guess all I could say is that creating something is an extraordinary privilege and if exercising that privilege feels too hard sometimes, try to keep going. What did Samuel Beckett say? “No matter. Try Again. Fail again. Fail better.”

The only other advice I might offer would be not to second-guess the subject matter of your book. Again, this is more of a “do what I say” piece of wisdom! I feared for The Stamp Collector because, in an industry that thrives on categorization, it doesn’t fit tidily into any drawer. Yet I’ve taken The Stamp Collector into many libraries and classrooms for writing workshops and presentations, and I find kids really engage with the subject. We talk a lot about PEN and freedom of expression (for the record, I think it works best with students from about age eight to eighteen) and kids are generally fascinated to learn about all the groups that work to protect writers, journalists and bloggers around the world.

They are appalled to learn that Nobel laureate Liu Xiabo, is still serving time in prison for writing seven sentences. They cannot believe how many journalists have been killed in Mexico. The editors and publishers who rejected this book for publication were understandably worried about its sophisticated subject matter but I’ve found that the younger you are, the simpler it is to grasp the concept of freedom of expression. Kids of all ages express compassion for both the writer and the guard. They understand the characters’ loneliness, their desire to have their voices heard and they understand that a truly happy ending is not possible here. But they also see the hope. The Stamp Collector is a wildly improbable book, but I’m glad I persisted. And I’m so grateful to the members of SCBWI for believing in it.

What a story behind the story!  Thanks, Jennifer.

I also contacted SCBWI Canada East's Regional Advisor Lizann Flatt to find out more about their region.  Here's what she wrote...

Canada East is a large geographic region with about 325 members. We have at least one large conference each year, and smaller volunteer-organized informal gatherings throughout the year. The rest of the time we hang out online together on our Yahoo listserve, illustrator members' blog, and chapter Facebook page.

Jennifer Lanthier's "The Stamp Collector" has won many awards and accolades including the Ezra Jack Keats New Writer Honor and being named to the United States Board on Books for Young People (USBBY) Outstanding International Book honor list. We're really pleased that the SCBWI Crystal Kite is among the awards her book has received. Jennifer has been a member since 2006.


You can find out more about Jennifer at her website here.

And to learn more about SCBWI Canada East, visit their online home.