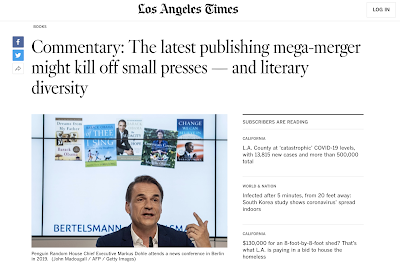 This Los Angeles Times opinion piece by indie publisher Chad W. Post, argues just that, saying the current ecosystem is one where "the most monied companies determine what is read."

The Authors Guild agrees the merger is bad for authors, stating,

“there would be fewer competing bidders for their manuscripts, which would inevitably drive down advances offered…. The history of publishing consolidation has also taught us that authors are further hurt by such mergers due to editorial layoffs, canceling of contracts, a reduction in diversity among authors and ideas, a more conservative approach to risk-taking, and fewer imprints under which an author may publish.”

Chad discusses another troublesome dynamic of how indie publishers and the soon to be "big four" interact:

"For the conglomerates, the most financially prudent way to acquire authors who aren’t sure things is to treat independent publishers as farm clubs that identify and develop talent ripe for exploitation. Let the presses with the thinnest profit margins take the risks, seek out the undiscovered — the books readers didn’t know they wanted, the authors who change the way we talk about writing — and then, once they’ve proved these books can take off, just poach the authors. Simple. A winning formula."

But the case is being made that the winners aren't authors, or diversity of voices, or even readers.
Illustrate and Write On,
Lee
Posted by Lee Wind, M.Ed. at 6:00 AM

Wow, what a sad development in an already tough situation for struggling authors. Seems that for every 100 timid gatekeepers, there may be 1 iconoclast willing to gamble on something new and different. Reminds me of Frank Zappa's comment about the old, cigar-chomping record execs who were willing to take a risk on new artists, in spite of them not understanding them, unlike the "hip" young execs whose hubris discounted anything not sanctioned by the "new trends." Besides being detrimental to the art, this approach is also bad business... thanks for the post.