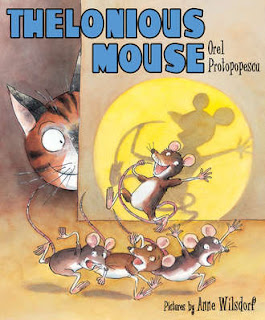 I contacted Orel to find out more about the author and book...


Lee:  Congratulations, Orel!  Can you tell us about THELONIOUS MOUSE?

Orel:   THELONIOUS MOUSE began with its sonorous title. As soon as I had that, I could see and hear my character. The book grew from the music of my childhood, like many of my poems for adults and children, as well as my picture book with the same illustrator, Anne Wilsdorf, TWO STICKS (FSG, 2007).  My hometown, Hempstead, Long Island, NY, was rich in music when I was growing up. Gospel spilled out of Baptist churches, rhythm and blues filled every block, and a prominent bandleader lived just down my street. In high school, we left the choir room still singing in our quartets. During breaks between classes, the hallways resounded with song. I discovered Thelonious Monk, the great pianist/composer, in my late teens. He followed his own compelling path, in spite of the criticism of those who couldn’t understand his quirky genius, just as my little mouse braves his family’s disapproval and even death, in the form of Fat Cat, to make his music… because he simply had to.   I, too, write because I simply have to.  My file drawers are full of unpublished poems and stories that clamored to be written. I dedicated this book to the memory of a dear friend, the late Jackie Raven (poet, tap dancer, and consummate charmer) who gave me a great piece of advice when I was working on the manuscript: “Make the scats about the cat!” Insulting the cat in rhyming scats was great fun for Thelonious and me (“Bite a bit of bitter old hang-fanged litter-box sitter!”) while it lasted, but we both needed to grow beyond that repertoire. Once he and I discovered the toy piano, he became a true musician. With Fat Cat breathing down his back, Thelonious found the courage to make his art. So, I hope, will all authors and artists.

Lee:  Beautifully put.  Can you tell us when you joined SCBWI, and what impact that's had on you and your career?

Orel:  I joined SCBWI in the early 1990’s, shortly after my first picture book was published. The friends and colleagues I’ve met through the organization have been instrumental in my life. The first time I accompanied my husband on a nine-month working sabbatical in Paris, France, I had friends, but no colleagues. The second time (2008-09) I was a published author and member of SCBWI. I contacted the Paris chapter and was scheduled to give a talk soon after my arrival. In a beautiful apartment overlooking the Park Monceau, where members congregated for the event, I met people who have enriched my life. I became part of a small critique group, was invited to give talks at the American Library and workshops at The American School (to be invited back to the school three years later) and befriended the gifted illustrator, Jeanne B. De Sainte Marie, with whom I am now collaborating (along with French producer, Actialuna) on an animated, interactive, watercolor poetry app (A WORD'S A BIRD) for the iPad.

While researching potential producers for our project, Jeanne and I were impressed by the work of Auryn, Inc., but they did not produce original projects. However, they adapted my first two out-of-print children’s books for the iPad, SINCE LULU LEARNED THE CANCAN and THE PERILOUS PIT (Simon & Schuster, 1991 and 1993) and TWO STICKS (FSG, 2007) is forthcoming. It is a great pleasure to see old books get new lives. My hope is that print publishers and digital media producers will find new ways to collaborate and enhance each other’s contributions to children’s literature.

I regularly attend the Metro NY SCBWI Tuesday lecture series, an invaluable way to connect with peers, agents and publishers, as are the annual and regional conferences. Thanks to a fellow SCBWI member and friend, Sandy Lanton, who encountered a publisher at the LA conference she thought would be perfect for a manuscript of translations of Chinese poetry with related history I’d been working on with co-author/illustrator Siyu Liu, that book found a great home. A THOUSAND PEAKS, POEMS FROM CHINA (Pacific View Press, 2003) was chosen by the New York Public Library for its “Books for the Teen Age” list. A highlight of the awards ceremony for me was meeting Phillip Petit, the man who walked between the towers, whose book was also being honored. He told me that preparation is all, not courage, whether you are three feet off the ground or thousands of feet. SCBWI does more than prepare authors and illustrators to enter this profession. It makes us part of a warm and vibrant community. Thanks to SCBWI, we are not isolated. It’s an incomparable honor to be awarded a Crystal Kite, 2012, by the members of the Metro New York region. Children’s book writers and illustrators are the most generous colleagues one could wish for. I thank SCBWI for keeping us in touch, informed, and united.

Lee:  Do you have advice to share with other authors and illustrators?

Orel:   Who am I to give advice to anyone? I have always followed my own idiosyncratic path, writing whatever I was moved to write, tossing away thousands of pages of a novel (still unpublished) and starting over. This is not an efficient method of working, so I can’t recommend it. But writing for my “career,” to fill a perceived need, could never have worked for me. If my heart isn’t in an enterprise, I simply can’t do it, just as I can’t follow a recipe precisely when I cook. I have to make it my own. If you see writing/illustrating as a way to make money, there are many far easier paths to that goal. But if you are compelled to write/draw/paint and life seems incomplete without your art, then by all means pursue it. Make the time, even if you can only manage thirty minutes a day. You will be laying down the first sturdy blocks of what may, in time, become a tower of words and/or images that you can climb and climb. Taking a long walk every day helps, too. You never know what you will discover along the way. In the same way, when you write or draw, you never know where the next stroke will take you. If you have the courage to be yourself, like my little mouse, Thelonious, you can’t help but be one-of-a-kind, because there is no one in the universe exactly like you. Well, perhaps there’s a copy of you in an alternative universe, another planet, but, alas, I don’t write fantasy or science fiction. Not yet, anyway, but I may surprise myself one day. I wish the same to you.

Lee:  Thank you Orel.  I love that image, of a tower of words, built day by day, that we can climb!

I also asked Pat Weissner, co-Regional Advisor for SCBWI Metro New York to share about Orel's winning the Crystal Kite, and to find out more about their region.  Here's what Pat wrote:

Metro NY Chapter has around 1500 members, including Manhattan, up north to Westchester and all of Long Island.  Orel is one of our Long Island Members.

Our chapter presents a monthly Professional Series, where we invite speakers related to the children's writing and illustrating industry to give an hour talk, followed by questions and answers and then a social half hour each month from Sept through June.   We've had authors, editors, illustrators, art directors, agents and marketing specialists as speakers.

Orel often attends the Professional Series, and I was in a class at the New School with her years before with teacher Margaret Gabel when she was working on THELONIOUS MOUSE.

We are thrilled for Orel and plan to present her award at our Sept Prof Series (assuming she will be in NY!)

You can find out more about Orel and her books at Orel Protopopescu's website.

And visit Metro New York's site to find out more about this vibrant SCBWI region!

My thanks to Pat for sharing about Metro New York, and Cheers to Orel for winning the Crystal Kite Member's Choice Award for her Picture Book, THELONIOUS MOUSE!

We're applauding you over here in Paris!