Helen Wang translates from Chinese to English. In 2017, she won a Chen Bochui Special Award for Children’s Literature in China and the Marsh Award for Children’s Literature in Translation in the U.K. for Bronze and Sunflower by 2016 Hans Christian Andersen Award for Writing winner Cao Wenxuan. Her new translation of another Cao Wenxuan novel, Dragonfly Eyes, was just released in the U.K. by Walker Books, with Candlewick due to release it in the U.S. in 2022. A curator at the British Museum, Helen Wang earned a Ph.D. in archaeology and B.A. in Chinese. 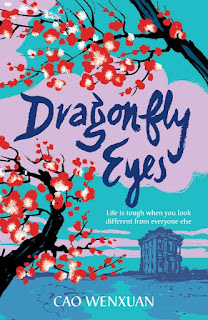 Nanette McGuinness: Congratulations on yet another fabulous translation of a wonderful book! What was it like working with Cao Wenxuan a second time and returning to his vision and world view? Were you able to communicate directly with him at all or did you work through your editor?

Helen Wang:I didn’t communicate directly with Cao Wenxuan during the translation and editing of Bronze and Sunflower or Dragonfly Eyes (we don’t have each other’s contact details). As I was commissioned by Walker Books, I raised with my editor Emma Lidbury anything I couldn’t resolve myself. Otherwise, I did the translation independently, and at the end, checked a few things I wasn’t sure about with a friend.

Cao Wenxuan and I have met several times at public events (e.g., at the Bologna Children’s Bookfair, the Shanghai Children’s Bookfair) and a few other occasions. We always exchange a few words, but he has a big fan club and lots of people wanting to talk to him. He is a VIP in China and has a breath-taking schedule, and while he never seems rushed, he doesn’t hang about for long.

Nanette: Dragonfly Eyes was published in China in 2016. How long did you get to work on the translation? Is that typical for your book translations or different—and if so, in what way and why?

Helen: The translation and editing process took a long time! The Chinese publisher sent me a copy of Dragonfly Eyes in the summer of 2016, and asked if I’d write a reader’s report. Emma Lidbury at Walker Books then commissioned me to translate it, we set up a contract, and I submitted the translation at the end of 2017. The original schedule was to publish it in 2019, but the date was rescheduled first on the UK side, and then the Chinese publisher asked us to wait while the author made a few changes. It was eventually published in January 2021, over three years after I submitted the translation. That’s a long time, and it was difficult to hold the story in my head. At one point I got cold feet and asked a bilingual friend if she would read the Chinese and English versions at normal reading speed (not close editing) and highlight any areas that didn’t ring true. I paid her to do this from my fee. The delays meant going through the translation several more times than we might have, but however time-consuming that was, it was always enjoyable working with Emma towards the best we could achieve.

My experience is that the editorial process in China will almost always include a close checking of the translation against the original, whereas the English language side does not usually include this. There are more English readers at Chinese publishing houses than there are Chinese readers at English-language publishing houses, and the same is probably true for all non-European languages.

Nanette: Dragonfly Eyes rings very true, with a clear sense of character and history, a strong voice for all the characters, and a vividness to the settings and descriptions of physical details, such as food and clothing. Sometimes that kind of writing can be easier to translate, as there's a good “roadmap” in the original, but sometimes it can be very tricky. Did you need to do research on any of the book's 20th century locales, lingo, or the historical times you were translating about, in order to make sure you kept the vocabulary and voices true to their time and place? Or was it fairly clear from the original?

Helen: Cao Wenxuan is a wonderful storyteller, both in his books and in real life, so there was a clear “roadmap,” as you call it. When I’m translating, I spend a lot of time online, looking up all kinds of things—text, images, videos etc. When I knew I would be in Shanghai in November 2017, I planned to walk around the city centre and check out some of the locations in the novel. I asked Cao Wenxuan (indirectly) if there were any specific places I should check out. My intermediary responded in the most amazing way, and arranged for Yin Jianling, another much-loved children’s author, to meet me at my hotel two hours after I got off the plane from London. Yin Jianling is a lovely person, and Shanghai is her city. We spent the late afternoon walking around Shanghai, and took the bus to another part of the city for dinner in a place I would never have found on my own. I can’t thank her enough, because I’m sure some of the warmth of that afternoon and evening made it into the translation. I also talked to Paul Crook, who grew up in China during the Cultural Revolution, and whose own parents were accused of being spies.

Nanette: One of the excellent choices you made in the translation—and there are many, as it reads beautifully—was to maintain the relationship names in Chinese (Nainai for grandmother, for example). For those of our readers who aren't translators, can you share anything about how you made that choice? For example, did you consult with the editor or Cao Wenxuan, or were you given free rein?

Helen: Thank you. English speakers have no problem reading and pronouncing Chinese relationship names, so I think it feels quite natural to use them, at least for the immediate family. It doesn’t always work, though, because Chinese relationship names are very specific: it’s not simply a case of brothers and sisters, aunts, uncles and cousins, but their exact position in the family in relation to the particular characters. It’s notoriously complicated, and I hear some people with extended families use apps to help work it all out! Sometimes in a story the same character can be referred to in many different ways, and it can be hard to keep track, especially if there’s a change of narrator or a switch in the point of view. In Dragonfly Eyes, we don’t know the names of all the members of the family, but we know the relationships. The original narrative explaining the family names is quite fun in Chinese but felt cumbersome and wrong in English. My initial suggestion was to draw up a family tree at the front of the book, but this didn’t work either, so in the end I created a very simple table, which I hope works for readers. Emma doesn’t read Chinese, so we did as we had done with Bronze and Sunflower: I translated the first chapter or so very directly, then the next one a little more freely, and so on until we found a balance we liked, and then I continued solo.

Nanette: Has winning the Marsh Award for translation or working with books written by an Andersen Award winner (an award also known as the "little Nobel")—that is, Cao Wenxuan—changed your life as a translator or the kinds of projects and books you're being offered? If so, how?

Helen: I’m very grateful that I had the opportunity to translate Bronze and Sunflower (thank you, Anna Holmwood, translator of Jin Yong’s martial arts novels, for recommending me). Winning the Marsh Award was a public validation with a cash prize, which somehow made it much easier for my friends and colleagues to understand why I spend quite a lot of my spare time translating children’s books. Previously, they had asked if I translated to keep up my Chinese, or for money, or looked askance at me, or complained that I was always too busy. That changed after the Marsh Award. I spent some of that money treating neglected friends to lunch, which was lovely. I put the rest of it towards learning more about the international children’s book world: for example, I went to the IBBY Congress in Athens in 2018 and to the International Research Society for Children’s Literature (IRSCL) Conference in Stockholm in 2019. I do get approached and asked to translate books, but I tend to be selective—if a book is going to be part of my life for weeks, or months, or years, I’d prefer it to be something I’m going to enjoy reading over and over again.

Nanette: What's next for you? Any interesting books that you're working on now? Are there books that you wish would be translated from Chinese into English that haven't been yet?

Helen: At the moment I’m working on a wonderful new middle grade book by Qin Wenjun. It’s set in contemporary Shanghai, and each chapter left me wanting to know what would happen next. I have been commissioned by the Chinese publisher to translate this one, and the rights are available. I’ve recently translated some picture books and samples of middle grade books for Books from Taiwan, which you can browse on their website. I usually have a few books on the go that I would be very happy to recommend to publishers. There are many more Chinese children’s books that I would love to see translated! Since 2000, there has been a strong focus in China on developing children’s books - there are some stunning picture books coming out, and some very interesting middle grade and young adult books too. In 2016, I started the blog/website Chinese Books for Young Readers with Minjie Chen of the Cotsen Children’s Library, at Princeton, and Anna Gustafsson Chen, prolific translator of Chinese literature into Swedish. Between us, we write about things we find interesting, and hope our readers do too.

Nanette: Thank you very much and congratulations, once again!

Award-winning opera singer Nanette McGuinness is the translator of 60 books and graphic novels for children and adults from French, Italian, German, and Spanish into English, including the well-known Geronimo Stilton Graphic Novels. Two of her recent translations, Luisa: Now and Then and California Dreamin’: Cass Elliot Before the Mamas & the Papas were chosen for YALSA’s Great Graphic Novels for Teens; Luisa: Now and Then was also a 2019 Stonewall Honor Book. Her most recent translations are For Justice: The Serge and Beate Klarsfeld Story, The Sisters #7: Lucky Brat, Chloe & Cartoon, Brina the Cat #2: City Cat, and Alter Ego.

Thanks to Nanette and Helen for this wonderful interview!