Business: Amazon and "The Publishing Ecosystem On The Brink" 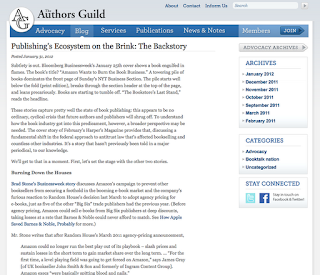 The Authors Guild published this article "Publishing's Ecosystem on the Brink: The Backstory" on their website, detailing Amazon's impact on the publishing industry.  It's essential reading, covering and explaining concepts like "the agency model" for ebook pricing, the blackout of MacMillian's buy buttons, the loss of Borders, Amazon becoming a publisher, and so much more.

Burning Down the Houses

Brad Stone’s Businessweek story discusses Amazon’s campaign to prevent other booksellers from securing a foothold in the booming e-book market and the company’s furious reaction to Random House’s decision last March to adopt agency pricing for e-books, just as five of the other “Big Six” trade publishers had the previous year. (Before agency pricing, Amazon could sell e-books from Big Six publishers at deep discounts, taking losses at a rate that Barnes & Noble could never afford to match. See How Apple Saved Barnes & Noble, Probably for more.)

Amazon could no longer run the best play out of its playbook – slash prices and sustain losses in the short term to gain market share over the long term. … “For the first time, a level playing field was going to get forced on Amazon,” says James Gray [of UK bookseller John Smith & Son and formerly of Ingram Content Group]. Amazon execs “were basically spitting blood and nails.”

Amazon’s response to Random House’s move was stunning and swift:

The next month, an Amazon recruiter sent an e-mail to several editors at big publishing houses, looking for someone to launch a new New York-based publishing imprint. “The imprint will be supported with a large budget, and its success will directly impact the success of Amazon’s overall business,” read the e-mail, which was obtained by Bloomberg Businessweek.


And of course, Amazon has announced it is launching its own publishing imprint.  Go read the full article at the Author's Guild site.

And in related news, regarding the new deal Houghton Mifflin Harcourt struck with Amazon, Josie Leavitt, An Independent Bookseller writing in Publishers Weekly, responds:  What Fresh Hell Is This?

"This move by Houghton Mifflin Harcourt underscores that the publishing playing field is shifting away from indies. Amazon is turning into the Walmart of the book world who dictates prices with threats of Buy Now buttons being removed, the insidious price checker app, etc."


And the reaction to Amazon becoming a publisher is growing into a boycott of Amazon.com titles


Illustrate and Write On,
Lee

My thanks to Darcy Pattison for reprinting the Author's Guild article in her Fiction Notes newsletter.
Posted by Lee Wind, M.Ed. at 2:59 AM

Wow. I have been following this as closely as I can, but the news changes fast. This is a good collection of info. Thanks!

Funny how what goes around comes around. Years ago, when the Chain of Chapters/Indigo Book stores opened all across Canada, they put hundreds of small indie book stores out of business.